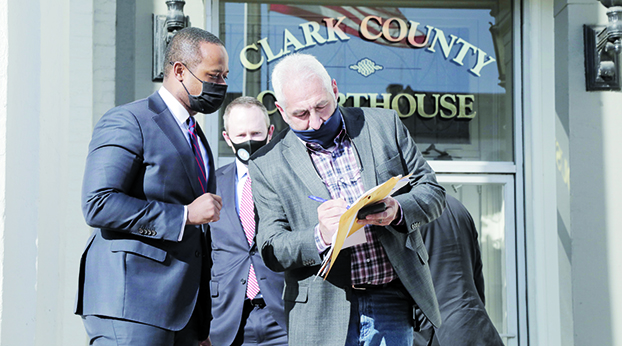 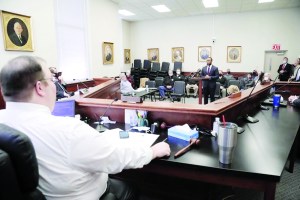 Kentucky Attorney General Daniel Cameron on Wednesday called the attack on the U.S. Capitol by supporters of President Trump “despicable,” but said he has “no regrets” about having supported the president.

He said he would not call for Trump’s impeachment because the president had only seven days left in office, and he has committed to an “orderly transition of power.”

Cameron, a Republican, also said he would work with President-elect Joe Biden and his administration on appointing new U.S. attorneys.

“I’m certainly appreciative of all that he’s done for Kentucky” and the way in which he “resonated with so many Kentuckians” on issues people talk about around their dinner tables, he said of the president.

“I think we’ve got to look to the future … but I do not regret being supportive of the president, nor do I regret the support that he gave me,” he said. “But we all have a responsibility to do better in this year to speak with courage and act with compassion, and I hope all of our leadership will do that, and we will do everything we can here on the state level.

Obviously, we’re going to have disagreements along the way, but I think we can do it in a respectful and civil manner, and that will be all to the betterment of our society.”

Cameron was in Clark County and Nicholas County Wednesday to meet with local officials and constituents and talk about issues he’s working on, including raising awareness of human trafficking. His office has received a $100,000 grant to “fight that scourge” in all 120 counties of the state, he said. He spoke about the issue in a brief meeting with the Clark County

Visiting communities and local leaders is “a responsible part of state government,” he said.

In an interview after his meeting with Clark County officials, Cameron talked about the threats of violence against himself and his family related to the fatal shooting of Breonna Taylor by Louisville police and the $300,000 contract he has with a police department in Jefferson County to provide around-the-clock protection. He also talked about a planned armed rally at the Kentucky Capitol on Sunday by far-right groups like those that demonstrated and then stormed the U.S. Capitol on Jan. 6. The FBI has issued a warning that armed protests are planned at all 50 state capitols over the weekend.

“My office will continue to monitor any upcoming situations that might occur, and we will work and partner with Kentucky State Police and our federal law enforcement community as well because we don’t want to see violence perpetrated anywhere” in the state, or in the nation’s capital, Cameron said.

He said he fears for his wife and family, but he won’t let threats keep him from doing his job.

“This has obviously been a challenging year all around, but I continue to do the work of the attorney general” in fighting human trafficking, child abuse and the drug epidemic, he said.

Cameron said he was supportive of efforts by the Republican-led legislature to curb the governor’s authority to reduce the spread of the coronavirus by enacting emergency orders, which have included temporarily closing restaurants, bars and schools and requiring masks.

“I don’t begrudge the governor for making decisions. I think it’s pretty well documented that we had disagreements … not out of any animus, but out of respect and obligation to our state and federal constitutions,” he said. He added that the legislature has a “responsible role” in “providing some perimeters on what executive power looks like.”

Asked whether he might run for governor or for a second term as attorney general in 2023, Cameron evaded the question, saying he was “thankful” for having gotten into his office once.

“I’m constantly reminded of the great responsibilities that this office holds for helping to improve the public safety outcomes … for the men, women and children of all 120 counties, helping to be a voice for the voiceless and a defender of the vulnerable. And so we’re going to continue … to do so to the best of our ability,” he said.