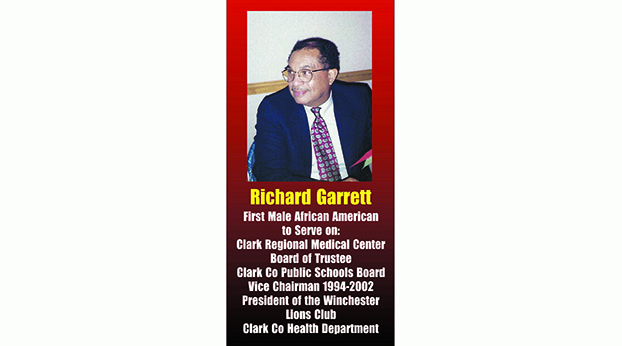 One of four new Black history banners in downtown Winchester features Richard Garrett, who served on the hospital board of trustees and the Clark County school board, among his other accomplishments. (Photo submitted)

“They’ll be up,” she said. “We’re going to have history all year long.”

The banners will be along Main and Maple streets.

“We want to make sure the children know their history,” she said.

The new banners feature:
• Richard Garrett, who served on the Clark Regional Medical Center board of Trustees, the Clark County Board of Education, was president of the Winchester Lions Club and at the Clark County Health Department.
• Dr. Beatrice O. Newell, the first African American female pediatrician in Winchester
• Mary Bell, who owned and operated Bell’s Kindergarten
• Revs. G.D, Jackson and Nessie B. Jackson. G.D. Jackson was a barber at the Brown Proctor Hotel before opening his own business on West Washington Street. Nessie Jackson owned an antique shop, a massage parlor and was the first female pastor at a CME church.

Winchester Unity Committee President Deatra Newell said the banners will take the place of others which have been on display.

“This is not to take anything away from anybody,” Newell said. “I want to make sure the significance of these African Americans who broke barriers. These are people who have done these things, so you can do anything if you put your mind to it.”

For the 15th consecutive year, community leaders and Clark County residents gathered to begin the new year in prayer. “How... read more