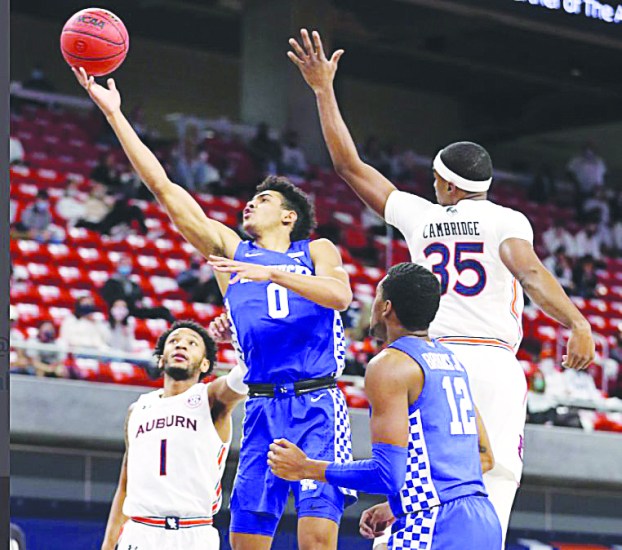 Cats come up short against Auburn

Kentucky stopped Auburn, but the Tigers still escaped with a 66-59 win over the Wildcats Saturday at Auburn Arena.

The loss was the second straight for Kentucky this week after the Wildcats (4-7, 2-3) opened the Southeastern Conference with three straight victories, with two of those on the road. Auburn defeated the Wildcats despite missing 14 of their first 15 shots.

Auburn (8-6, 2-4) pieced together a 10-run in the second half that enabled the Tigers to hold on down the stretch. Kentucky led 25-21 at the half but Auburn outscored the guests 45-34 in the final half.

“We’re close …. I’m disappointed in what we did,” Calipari said. “We came out of a couple of timeouts and didn’t do what we were trying to do. I thought we had them. We should have been up big at half. … There were points in this game – I was proud of these guys and points. I’m like, ‘what in the world are we doing?’”

Calipari said the Wildcats weren’t physical enough especially on the boards. Auburn held a 41-38 edge on the glass.

“We should be a better offensive team, but it got rough,” Calipari said. “We weren’t able to battle back. … At the end of the day, we got out-toughed. That’s what happened.”

“We’re supposed to be the tougher team every time and today we were not the tougher team,” said Toppin, who finished with 10 points. “We did play with effort, but we did not play with a lot of toughness. In the first half, they had 12 offensive rebounds. That’s not acceptable for any team. We just need to find a way to get tougher and just play with some more grit.”

The Wildcats committed 18 turnovers and had just seven assists and Calipari said the team’s selfish play at times proved to be costly.

‘We could have made easy plays and we didn’t,” Calipari said. “We made the hardest play and those were our turnovers. In a game like this, three baskets break the game open. .. We’re still not there yet.”

He added that players passed up shots at the most opportune time.

“That’s what it got down to,” he said. “We missed wide-open open shots and we had our chances.”

Dontaie Allen scored eight points, all in the first half, but sat out the first six minutes of the second half before making a return appearance. Calipari said Allen passed up some opportunities in the first half.

“At the end of the day, we were running stuff for Dontaie and he wouldn’t shoot the ball and that’s why I took him out the one time. We ran two things for him when he had shots and he wouldn’t take them…. Dontaie wasn’t the issue. … Dontaie got great looks in the second half, got fouled but they are going at him defensively.”

“We still have our chance,” Calipari said. “We can go on a run and we’ll be fine.”

The Wildcats stood for the national anthem a week after taking a knee in a win at Florida last weekend. Kentucky stayed in the locker room during the anthem in a loss to Alabama earlier this week at Rupp Arena.

Cats come up short against Auburn

By Keith Taylor Kentucky Today Kentucky stopped Auburn, but the Tigers still escaped with a 66-59 win over the Wildcats... read more