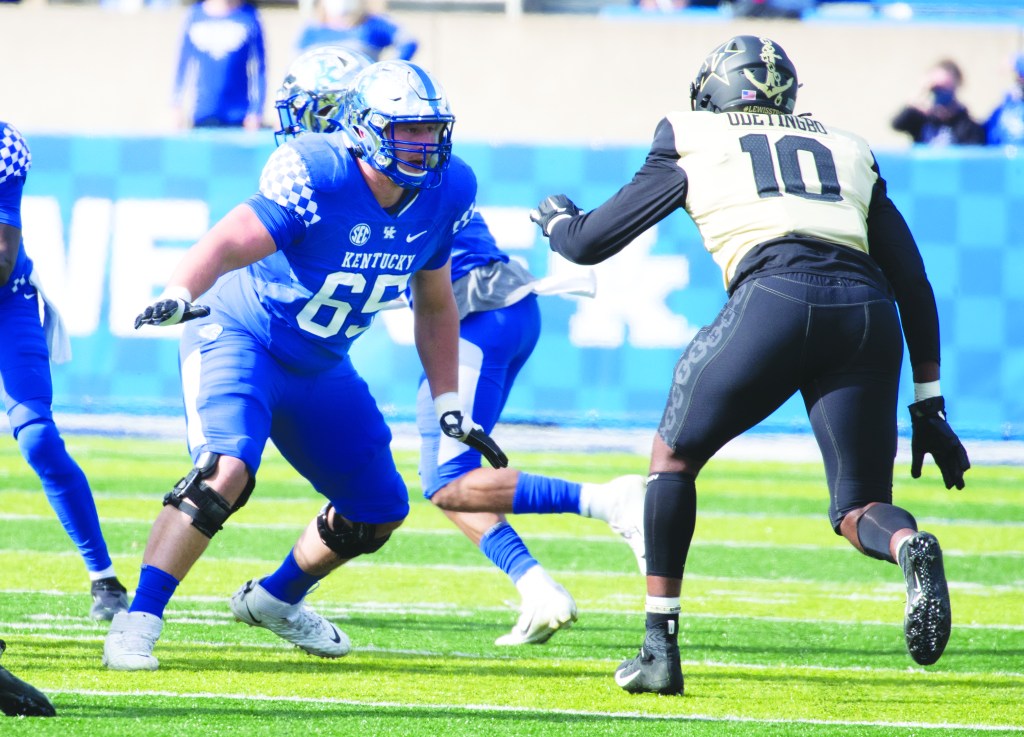 Landon Young believes Kentucky's Big Blue Wall will still be in good shape next year even without him and Drake Jackson. - Photo by Mark Cornelison

Kentucky offensive tackle Landon Young spent five productive years playing for the hometown Wildcats and is now in Arizona training for what he hopes will soon be a professional football career.

The Cats have to find a replacement for Young and center Drake Jackson, another fifth-year Kentuckian, on next year’s offensive line but got a boost with the return of All-American Darin Kinnard at the other tackle.

Young is optimistic the Big Blue Wall will be just fine next season without him and Jackson.

“I think that there’s guys that need reps to be able to fine hone their skills. Of course, we have a lot of start reps and a lot of experience on our starting line, but I see these guys that are willing to work and willing to be coached that are excited to have coaches come in and teach them. They want to get out there and play ball.”

Young says the perception of being an offensive lineman has totally changed in the last five years thanks in large part to the work of former line coach John Schlarman.

One of those new lineman that will be coming in this week is Frederick Douglass standout Jager Burton. He was the top-ranked recruit in the state and wanted to enroll early to get a jump start on the 2021 season.

Former Kentucky linebacker Donte Key, an assistant coach at Douglas, believes Burton has a chance to be a contributor as a true freshman much like former Douglas four-star recruit Walker Parks did last season.

“I would not be surprised if Jager puts on 15 pounds and has a chance to start at guard,” Key said. “Walker played a lot this year and made some type of freshman All-American team. Coach (Nathan) McPeek can coach offensive linemen. He knows how to get them ready for the next level.”