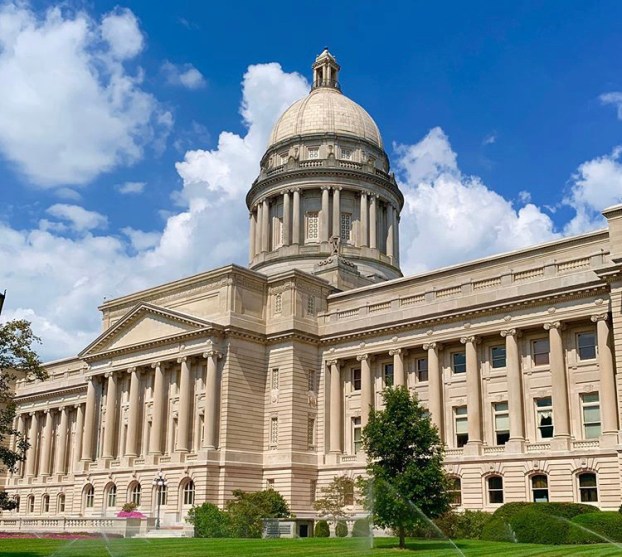 The General Assembly has recessed until Feb. 2. - Photo by Jeff Moreland

This Week in Frankfort: A summary of the General Assembly’s actions as they recessed until Feb. 2

This year, for the first time since the Kentucky General Assembly began holding annual sessions in 2001, lawmakers continued their work into a second week of an odd-numbered year session before starting a recess that will last until early February.

Legislative leaders said working the extra days gave them a chance to move priority bills through the process. It also allowed them to jumpstart budget deliberations.

It’s unusual for lawmakers to create a state budget during an odd-numbered year. State budgets that cover two-year cycles are typically created during even-numbered years, when the legislature holds longer 60-day sessions. However, the COVID-19 pandemic was spreading at the peak of budget-making season last year. Policy experts were wary of planning two years’ worth of spending at a time when no one knew the toll the pandemic would take on the economy and state revenues. They decided to pass a one-year budget then, setting the stage to return to the negotiating table this year to plan a budget for the upcoming fiscal year, which begins July 1.

Lawmakers head into this year’s budget deliberations with the state in better financial shape than many feared at the start of the pandemic. The Consensus Forecasting Group – economists who make the revenue forecasts that budgets are built around – projected in December that state revenue would increase $53 million in the next fiscal year. Still, some policymakers urge caution in spending, saying that state revenue has been boosted by federal aid to Kentucky that won’t be available on an ongoing basis.

Faced with a deadline to complete budget work before this year’s legislative session ends in late March, lawmakers have moved quickly. Versions of the next state budget were approved by both the House and Senate this week, leading to the formation of a budget committee tasked with creating a plan that both chambers can ultimately agree on.

As the budget plan advanced, lawmakers stressed that the quick action was largely procedural in nature. There are still plenty of big decisions to be made before there’s a clear view of what the final budget will look like. The plan that advanced through chambers this week was essentially a continuation budget put together to move the process to a point where the in-depth budget work can begin.

The same goes for three other spending plans that advanced this week. In addition to the state budget, conference committees have also been formed to hammer out the details of proposed budgets for the Transportation Cabinet, the Judicial Branch, and the Legislative Branch.

In other business, lawmakers approved legislation this week that would allow Kentuckians to file lawsuits against state government in the county of their residence. Currently, such cases must be filed in Franklin Circuit Court. House Bill was approved 28-6 in the Senate on Wednesday. The bill passed the House 69-24 the previous week. The bill has been delivered to the office of the governor, who has ten days to sign the bill into, allow it to go into law without his signature, or veto it.

Lawmakers have now returned to their home districts for a recess period required by the state constitution. They will come back to the Capitol on Feb. 2 to resume the session.

That makes this an important time for lawmakers to hear from their constituents on the issues confronting Kentucky. If you’d like to offer feedback, please call the General Assembly’s toll-free Message Line at 800-372-7181.

Thirty-seven students from George Rogers Clark High School are among hundreds of high schools in Central Kentucky recognized in this... read more