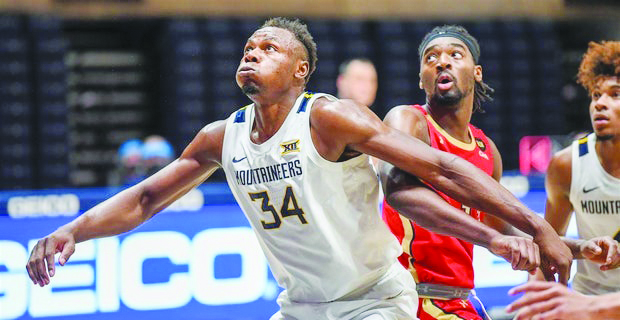 Oscar Tshwiebe will bring a low post presence on the court but also is fun off the court and even played Santa Claus for patients at a West Virginia children's hospital. - West Virginia Athletics Photo

Tshweibe will be big boost for Cats next season

West Virginia transfer Oscar Tshwiebe won’t be able to play this season but Kentucky coach John Calipari is hoping he will be the same type valuable practice player that current NBA player Enes Kanter was his year at UK when he was ineligible.

“I told him, ‘Your job will be, how do I help these guys?’” Calipari said. “And again, maybe with him, I take five guys and those five are playing the top seven or eight guys and we start scrimmaging that way, even though it’s late in the season. It’s something that I’ve thought about when we get him.”

One NBA source believes Tshwiebe will be a midseason steal for Calipari and Kentucky.

“That kid is a top 10 draft pick if he plays the way he can,” the NBA source said. “Calipari is in good shape there. Kentucky has not had a player exactly like him recently. He’s big, tough, physical and more skilled than most realize. He’s also still learning how to play the game and is only going to get better and better.”

Tshiebwe moved to the United States from the Democratic Republic of the Congo in 2015 — about a year after he started playing basketball — before his freshman year of high school at Mountain Mission School in Virginia. He played his final two high school seasons at Kennedy Catholic in Pennsylvania where he averaged 23.4 points, 18 rebounds and 5.2 bocks per game. His team won Pennsylvania state titles both years.

“Tsheibwe is such a grab for Kentucky’s front court. Brings some much needed size and strength and overall physical presence in the post,” Tarullo, a life-time UK fan, said.  “He had an immediate impact with WVU —and was Mr. Double-Double — almost averaged a double-double.

“I was pretty surprised at his sudden departure but I think it’s a big testament to his character that it doesn’t seem to be on bad terms — seems to still have the respect and well-wishes of (West Virginia coach Bob) Huggins and his teammates who seem like they will genuinely miss him.”

Tarullo says Tsheibwe gives UK a definite “presence down low” but notes that his “levity off the court” is something West Virginia will miss as much as his on-court presence.

“One of the more memorable moments I have of him in Mountaineer gear was in 2019 when the team visited a children’s hospital and Tshiebwe played Santa,” she said. “Tsheibwe is fun to watch and listen to — his accent is great.”

UK looks to be on pace for NIT

Kentucky has had two teams go to the NIT, not the NCAA Tournament, in the last 12 years, and this... read more