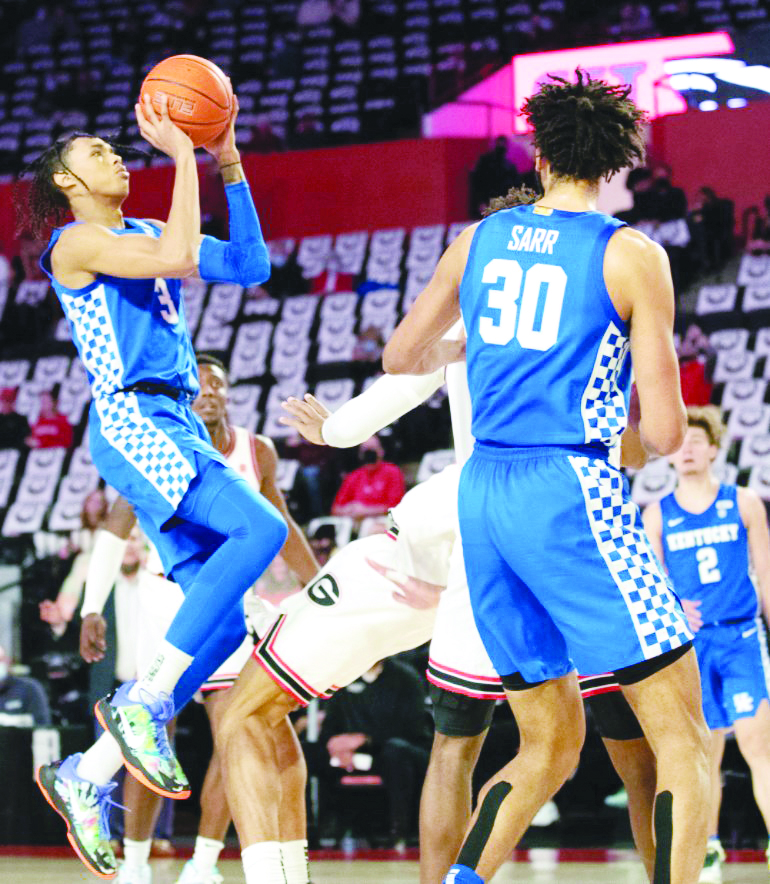 BJ Boston goes up for two of his 18 points in Kentucky's 63-62 loss at Georgia Wednesday night in Athens. - SEC Photo

John Calipari was down after watching his team end a 14-game winning streak to Georgia Wednesday night in Athens.

The Wildcats (4-9, 3-3 Southeastern Conference) led by one with three seconds remaining, but PJ Horne’s basket on an out-of-bounds play with 1.3 ticks left lifted Georgia to a 63-62 triumph over the struggling Wildcats. The loss was the third straight for Kentucky, which opened conference play with three consecutive wins.

Calipari wasn’t in a good mood after watching his squad squander a six-point lead in the final 1:40 and miss crucial free throws that allowed the Bulldogs to remain in striking distance. Georgia (9-4) outscored the Wildcats 7-0 in the final 1:49 for their second consecutive league victory.

“I need someone to talk to me because I’m discouraged,” he said. “What I just saw, the way we finished the game, the shot selection at the end, the free throws, the turnover. (We) just throw the ball to them for layups. We gave them (25)  points on turnovers, throwing them the ball. I’m discouraged.”

In an effort to jumpstart his team, Calipari tweaked the starting lineup, starting Dontaie Allen and Lance Ware in place of BJ Boston and Isaiah Jackson.

The move provided a boost for Boston, who came off the bench and led the Wildcats with a game-high 18 points. Jackson and Keion Brooks, who also came off the bench, followed with 12 points apiece. Overall, Kentucky got 46 points from its reserves.

Allen scored three points, grabbed three rebounds and collected a steal in his first career collegiate start. Allen took just three shots and missed a pair of 3-pointers in the first half. Jackson added four rebounds and four blocks. Olivier Sarr had six points and grabbed 13 rebounds, including 10 on the defensive end of the court.

Like Calipari, Brooks said the loss was a tough one to swallow, considering the Wildcats host LSU Saturday, followed by a road encounter at Alabama Tuesday. Both teams currently are in the upper echelon of the conference standings.

“Losing like that is tough, especially when we had a pretty good lead of six with three minutes (to go) and we just we gave the game away, which is tough,” Brooks said.

Although Boston was a bright spot for Kentucky, the Wildcats finished with 17 turnovers, with the Bulldogs scoring 25 points off those miscues. Point guard Devin Askew Davion Mintz and Allen combined for nine turnovers. Askew had five miscues and reverted to his past habits.

“Our guard play was awful,” Calipari said. “B.J. showed some life. The rest of the guard play was not good at all. I mean, you try to open up the court a little bit, can’t get by anybody (and) end up taking a bad shot.”

Most of those bad shots were from long range. Kentucky missed its first nine 3-pointers and made just four shots on 16 attempts from behind the arc. Despite the inability to get back on track, Calipari is confident his team can bounce back.

“I’m not giving up on them,” Calipari said. “… We should have won the game. We’re up six. We’ve got the ball. I mean, come on. But you got to give credit to Georgia. They never stopped.”