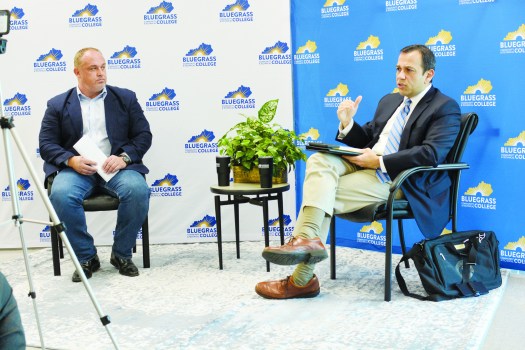 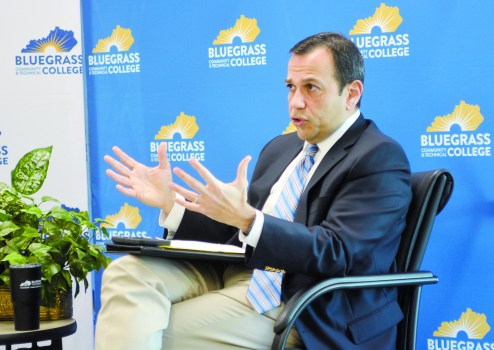 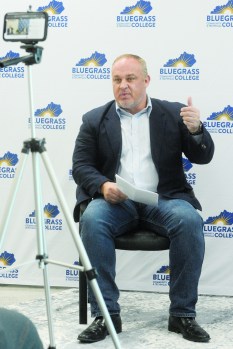 House Bill 1 allows businesses and schools to remain open if they have COVID-19 safety plans that follow guidelines of the CDC or the Governor’s Office, whichever are least restrictive.

Senate Bill 1 requires the governor’s emergency orders to expire in 30 days unless the General Assembly extends them, and it forbids the governor from repeating them.

Both bills passed the Senate and House and were vetoed by Gov. Andy Beshear Tuesday. That’s the same day Dotson and Alvarado discussed them during a one-hour Facebook Live forum at Bluegrass Community and Technical College’s Winchester Campus.

Dotson, a pastor, restaurant owner and first-year representative who campaigned last year on the issue of lifting restrictions on businesses and reopening Kentucky’s economy, said HB 1 sets the framework.

“This bill provides clarity and assurance for businesses, schools, parents and nonprofits that under the law, any of these entities may remain open and operational as long as they follow comprehensive operating plans detailing how they will adhere to the safety guidelines that are set,” he said.

Dotson said the bill also establishes guidelines for allowing parents to visit children in state care and for children and others to visit parents in nursing homes.

“People passed away without even being able to hold the hand of a loved one,” he said.

Alvarado, a Winchester physician who has served in the Senate since 2015, said SB 1 involves legislators in the emergency orders.

“If the governor wants to call a state of emergency, he can. If he wants to go beyond 30 days, he has to consult the General Assembly. And he cannot extend it with another emergency order for the same type of emergency. You can’t do the same one over and over again,” he said.

Senate Bill 2 similarly gives lawmakers some oversight over administrative regulations having to do with public health emergencies.

Beshear said he vetoed SB 1 and HB 1 because the bills hinder his ability to take action to slow the spread of the coronavirus. Those actions, including closing schools and restaurant dining rooms and limiting in-person gatherings, have been effective, he said.

Republicans have large enough majorities in both chambers to override his vetoes, but Beshear has said that if they do, he will go to court.

Another COVID-related bill discussed by Alvarado was SB 8, which would do away with part of an old state law requiring vaccinations.

Alvarado said he had gotten his first coronavirus shot and would be getting his booster shot the next day, and he encouraged others to do the same.

It’s important that people be vaccinated in order to “get life back to normal,” he said. “It’s safe to use, and you should get it if you can.” However, he said, it should be one’s choice.

Yet another COVID-19 would offer liability protection for businesses and other entities who are sued, provided the defendant made a good-faith effort to conform to safety guidelines.

“There’s no reason that our businesses or churches that are acting responsibly” should ever have to “fear a lawsuit,” Dotson said.

Alvarado said there are concerns about the wording of that bill, HB 10, because legislators don’t want to shield businesses from “gross negligence,” but they also want to ensure that hospitals and health care clinics aren’t sued unfairly.

A bill Dotson said he was proud of is HB 2, which would give the attorney general authority over enforcement of abortion laws and prohibit abortion from being considered an urgent procedure. Both he and Alvarado voted for that bill and for the so-called Born Alive bill, SB 9, which would require that an infant born alive after a botched abortion be given effective medical treatment.

“That was an important bill that we passed,” said Alvarado, who was one of its sponsors.

Beshear vetoed the bill last year because, he said, there are already such protections in state law, and legislators ran out of time to override the veto.

The first question from the audience came from County Magistrate Greg Elkins, who wanted an explanation of HB 3.

Currently, court cases involving state government go to Franklin Circuit Court, but under HB 3, the legislators said, lawsuits would be filed in the county where the issue originates.

“They almost become a super circuit when they have that kind of power,” Alvarado said, referencing the Frankfort judges. “We want to take that away and even it out. We have other judges throughout the state who are very capable of hearing these cases.”

Dave King asked about HB 14, which creates a property tax exemption for veteran service organizations. Neither legislator had heard of it, but Alvarado researched it on his smartphone and noticed that it had quite a few cosponsors of both parties.

“The odds look good for that in that regard,” he said, but it may depend on what kind of financial impact it has during a year in which revenue is going to be tight.

County Judge-Executive Chris Pace asked whether there would be legislation regarding local mandates so that small communities don’t have the same coronavirus restrictions as large ones.

Alvarado said he wasn’t aware of any, but said that in general, many lawmakers were for greater local control in principle.

In response to a question by Tim Janes, executive director of Rose Mary C. Brooks Place in Winchester, Alvarado said he has a 60-page bill he will file when the legislature resumes its session on Feb. 2 to “revamp and modernize” assisted living in the state.

“We’re trying to catch up with what other states are doing in assisted living and make sure the reimbursements are accurate,” said Alvarado, who chairs the Senate Health and Welfare Committee.

One proposal that would ultimately be left up to voters to decide is HB 4, a constitutional amendment that could give the legislature greater authority.

“It would allow the General Assembly to call itself into session,” Alvarado explained.

Currently, only the governor can call a special session. Regular sessions are held in January and are limited to 60 days in even years and 30 days in odd years.

The bill is sponsored by Sen. David Givens, R-Greensburg.

“His comment was that this might be the most important bill that we actually ever pass,” Alvarado said.

If it does pass the Senate and House and governor, it would be a question on the 2022 general election ballot.

The entire forum can be seen on the Bluegrass Community and Technical College Winchester Campus Facebook page at https://www.facebook.com/BCTCWinchester