NAILED IT OR FAILED IT? Pork skillet dish a definite winner 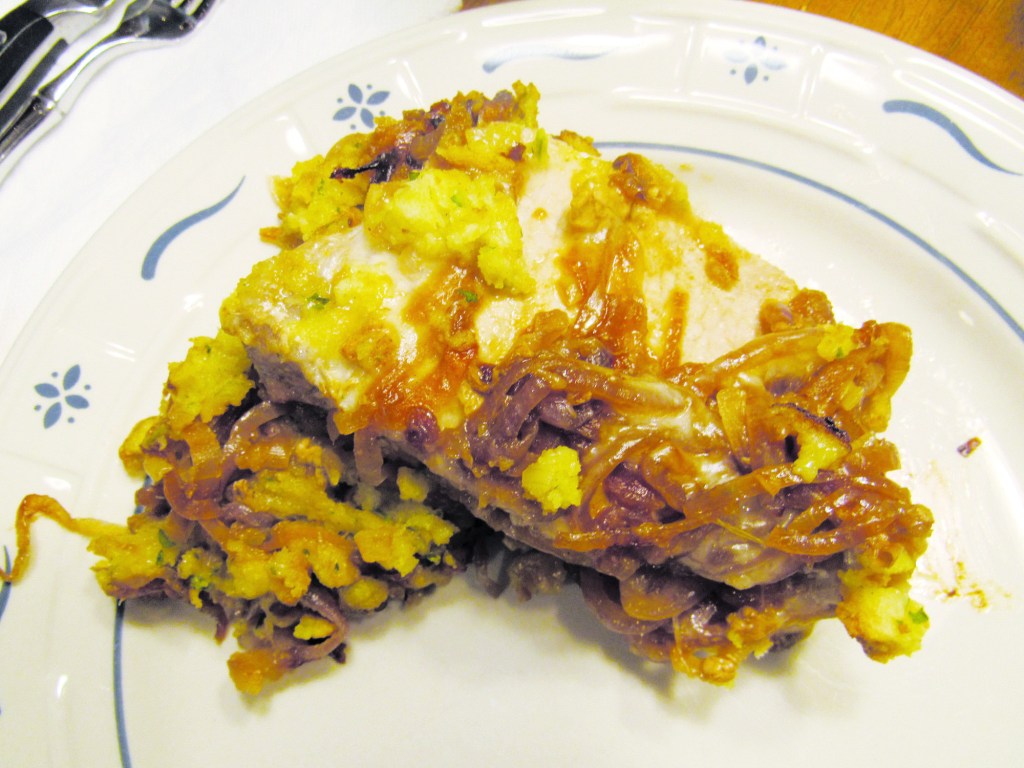 Mix stuffing mix and 1 1/2 cups hot water; spoon around edge of skillet.  Top with cheese; cover.  Cook 5 minutes or until cheese is melted.

I wanted to fix something for supper that wouldn’t have me in the kitchen all afternoon prepping and all evening cleaning up. This recipe for French-Onion Pork Chop skillet, torn from the Winter 2008/2009 issue of Food Magazine, appeared to be just what I was looking for.

I had all of the ingredients on hand and began peeling and slicing the onions. This took a while because I kept crying onion tears; you know the ones that make your eyes burn and run. This drives me crazy. I’ve tried several tricks that say you won’t cry, but none seem to work that well.

After all the slicing was done, I heated a large skillet with a little oil in it. I know the recipe calls for cooking spray but I don’t like using it because it leaves a sticky residue on everything.

Once the skillet was hot, I added the pork chops and onions. Of course, I cooked the pork longer than called for since I don’t like any pink in my meat. After about 20 minutes I removed the pork from the skillet and continued cooking the onions until they were nice and brown, but not caramelized.

While the onions were browning, I prepared the stuffing mix and set it aside. I then stirred the Worcestershire sauce into the onions, placed the pork chops back in the skillet and scooped the cooked onions on top of the pork.

The stuffing went into the skillet all around the pork chops and I sprinkled the mozzarella top. After placing the lid on the skillet, I set the table and washed a few dishes.

Once the cheese was melted and the stuffing was heated through, about seven minutes, we were ready to eat. Lo and behold, the kitchen was not a total mess.

I sat the skillet on the table, on a hot pad, and after Brad’s prayer, we began to eat.

I’m not a cheese fan and I don’t eat just plain cheese, but I do eat it on pizza and in a few other dishes; just as long as there’s not tons of it. This dish looked pretty much like the photo that accompanied the recipe in the magazine.

After a few bites I asked Brad what he thought of the new dish. He said he liked it fine, but that the pork was a little tough. I attribute that to my overcooking it in fear that it would not be done. I tried to get a bite of pork with every fork full of the stuffing and onion mixture, and thought the flavor was really good. Brad agreed.

There was more of the onion and stuffing mixture than we could eat with the pork chops. By itself, it was still delicious as a side dish for another meal.

We agreed that this recipe falls in the Nailed It category, but I need to make a note not to overcook the pork the next time. This recipe also met my criteria for being fairly quick and not leaving the kitchen a total mess, so Brad and I were able to sit and enjoy a movie together after dinner.