‘The Maltese Falcon’ soars into theaters 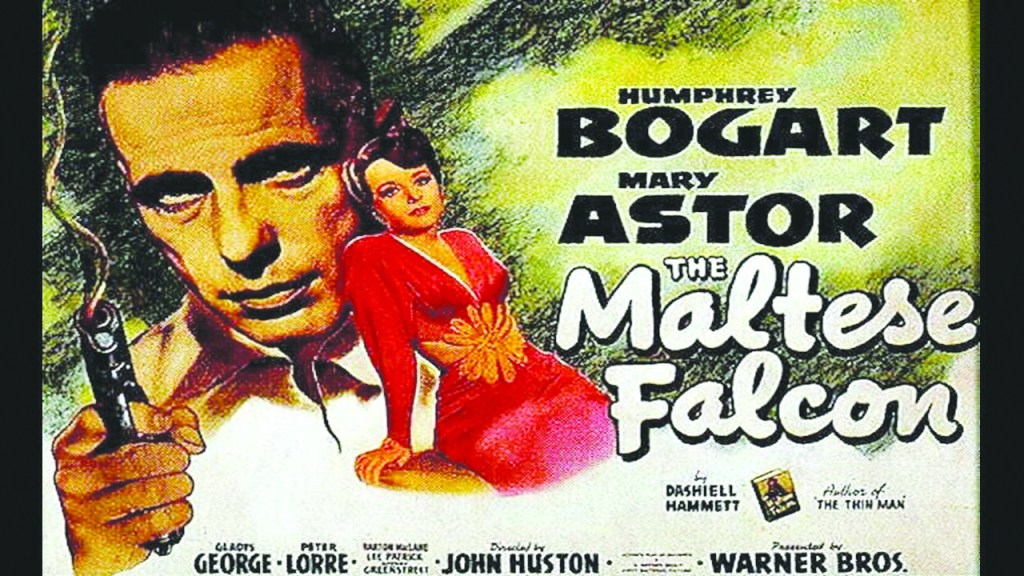 It is good to be driven and with a steadfast perseverance when you are on the quest to fulfilling your dreams. Like anything else, too much is bad for you. Ambition at times can blind one from enjoying the journey as the eye becomes obsessed on the prize. This ambitious obsession breeds self-destructive greed and betrayal against one’s moral code while in pursuit for what you to believe is rightfully yours for the taking. Today’s Killer Diller of a flick packs a double shot of moxie while showcasing the flaws in us all, so let’s take a gander of “The Maltese Falcon” (1941).

“The Maltese Falcon” is a crime drama taking place in San Francisco where private investigators Sam Spade, portrayed by Humphrey “The Big Sleep” Bogart, and partner Miles Archer, played by Jerome “High Sierra” Cowan, initially take on the case of the missing sister of Ruth Wonderly, Mary “Hush…Hush, Sweet Charlotte” Astor.  Before you know it, Archer is found dead and the hardnosed Spade begins to be followed by nefarious characters on the mean streets of this concrete jungle where double crossings, betrayals, and greed are at every corner waiting to snag a valuable jewel-encrusted falcon statuette.

Spade is a cold hard man that lives by a code of doing his job which makes him the hero in “The Maltese Falcon.” Though he is brash and clever with his words to stand his ground over others, he is by far cleaner in spirit than the lying femme fatale who he has an attraction for or the sinister goons, Peter “M” Lorre Sydney “Casablanca” Greenstreet, and Elisha “House on Haunted Hill” Cook Jr., which keep attempting to stop him from discovering truth in this detective mystery. Spade is one of the first portrayals of the antihero that the viewer can relate to as he is flawed, hardened by life, scarred by experience but with all of the gruff and grit through the act of living, he has a moral compass, a loner’s philosophy, and awareness of the value of his integrity.

“The Maltese Falcon” was the directorial debut of actor John “The Misfits” Huston who also penned the screenplay adapted from the 1930 Dashiell Hammett novel of the same title. Upon its release, “Maltese” was a hit due to the mixture of  violence and honest portrayal of greed within people at a time that was supposed to be squeaky clean up on the silver screen. This release was one of three adaptations of the novel but is considered the definitive adaptation to Hammett’s word rather than 1931’s “Dangerous Female” and 1936’s “Satan’s Met a Lady.” The style, dialogue, beautiful cinematography, and visual aesthetics make this feature one of the most beloved in film history and the catalyst of the American film noir while birthing the pop culture icon of Bogart that we know today.

We have all been put through the wringer now or then by a heartbreaking dame, failed futile pursuits, or corruption in society. Stick to your code, keep your integrity guarded, and stay loyal to those who were there when you were down. Those are the treasures that have real value, priceless.

“The Maltese Falcon” will be screening at Cinemark at Fayette Mall in celebration of its 80th anniversary as part of the TCM Big Screen Classics at 3 p.m. Jan. 24 and 7 p.m. Jan. 27.

See ya kid and have a film-tastic day!