Where in the World? The McMillan family 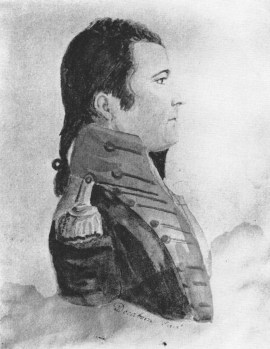 Col. William McMillan (c.1812) by Samuel Dearborn, said to be the first portraitist practicing in Kentucky. The painting was made in Frankfort, possibly while the artist was in jail awaiting trial for murder. (Photo submitted) 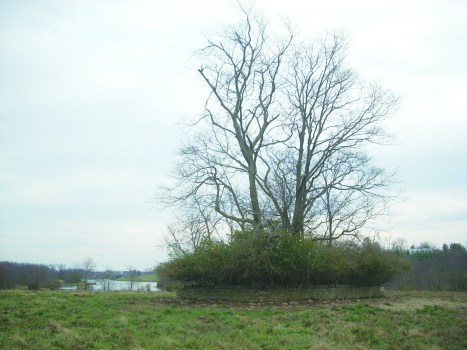 McMillan Cemetery where William McMillan is buried along with his parents, James Sr. and Margaret. (Photo submitted)

The McMillans were one of the illustrious families of early Kentucky.  While the surname appears to have dimmed out here, their contributions to our county’s history are worthy of remembering.

The first western adventurers of the family included brothers Robert, James and John who came to Fort Boonesborough in the summer of 1775.  That winter Robert and James blazed the trail from Boonesborough to Lower Blue Licks, known as the Salt Spring Trace.  John was killed by Indians the following year near Moccasin Gap in Western Virginia.  In 1782 another brother, Jonathan, was killed at Estill’s Defeat, north of Mt. Sterling.

The sire of the family was James McMillan Sr., born in Scotland and educated at University of Edinburgh.  He was said to have been a Latin and Greek scholar.  James immigrated to America and settled in Virginia.  There he married Margaret White, a daughter of Dr. Robert White, also a native of Scotland.

Describing the family’s move to Kentucky, James Jr. stated that he “had claims to a considerable quantity of land” and, after urging his father leave Virginia and move to Kentucky, “considered himself under some obligation to provide for his parents, who were aged,” and his brother William who was too young to acquire land on his own.  James agreed to give his parents 700 acres of land to live on during their lifetime.  He induced William to care for the parents in their old age with the promise that William would receive the 700 acres after they died.

The land was part of 1,400 acres James Jr. had claimed on Lower Howard’s Creek.  The other half James gave to his brother-in-law, William Trimble, who had married his sister Mary.

The parents came to Boonesborough in 1783, and the three brothers went to the tract on Lower Howard’s Creek to put up a cabin for them and clear a few acres of land.  In 1785, the parents moved into the cabin where they lived until 1798, the year they died; Margaret in February, James Sr. in August.

The three brothers all led remarkable lives.  The oldest, Robert, fought in the Revolutionary War with the 3rd Virginia Regiment and, as a captain in the Kentucky militia, served on many campaigns against the Indians.  He patented 900 acres of land on Lower Howard’s Creek, which included most of today’s Stoney Brook and Hillcrest subdivisions and the new high school.  His noted spring—later known as Calmes Spring, located on the high school property—was considered as a site for the county seat.  Robert married Polly Strode, a daughter of John Strode.

Brother James was a surveyor and public servant.  He was one of the first justices appointed to the Clark County Court.  Then he and Richard Hickman served as the county’s first representatives to the Kentucky General Assembly.  James served as one of the commissioners to locate the state capital, as well as a commissioner to lay out the town of Winchester.  As a colonel in the Kentucky militia, he commanded a regiment during the Indian Wars.  James later resided on Lulbegrud Creek just over the line in Montgomery County.

Brother William became the best known of the family.  As a youth, he spent time with his mother’s brother in Virginia.  “Alexander White was wealthy, a lawyer in high standing, and without any children at all.”  If William would come to Virginia to live, he offered to give him “a liberal education, instruct him in the knowledge of the law, and in every respect treat him as if he were his own child.”  William was willing but the family prevailed upon him to live with and support his parents until their death, which he did.

William served in the militia, rising through the officer ranks.  His last promotion was to the rank of lieutenant-colonel in the U.S. Infantry during the War of 1812, in which he headed the recruitment department for Kentucky and Tennessee.  According to the family, he fought in the Battle of the Thames that ended the war in the West.  A watercolor portrait shows William in his U.S. Infantry uniform.

William was elected to the Kentucky House of Representatives for twelve terms (1801-1820) and one term in the Senate (1827-1831).  He was a founding member of Democratic Society of Clark County.  These chapters in Kentucky were originally organized to press the federal government for right of navigation on the Mississippi River.  William left a detailed diary of his trip to Detroit, where he drove a herd of cattle in 1799.  Along the way he met the notorious Simon Girty and encountered a Wyandot who William was almost certain had killed his brother at Estill’s Defeat.

He died in 1836 and is buried in the family graveyard with his parents.  The cemetery, enclosed with a handsome stone fence, is wildly overgrown with honeysuckle.  It stands near the northwest corner of the Reservoir, where his home and his parents’ cabin stood.

Sister Mary who married William Trimble, a distiller on Lower Howard’s Creek, is notable in her own right.  She was the mother of three judges—son Robert, a justice of the U.S Supreme Court, and sons John and James, judges in Kentucky and Mississippi, respectfully.

Much of the information about the family comes from a lawsuit, McMillan v. McMillan, one of those internecine affairs all too common in early Kentucky.  It was reported that James Sr. “for 10 or 12 years before his death” had been “verry much in his dotage and did not pretend to transact any business during that time.”  At James Sr.’s death a will was produced that left only 300 acres of land to William of the 700 acres promised.  Learning that part of the land was devised to Robert’s son, William cried foul and claimed the will a forgery.  The case, found in Clark County records, runs to 103 pages and is filled with interesting details about the people and places of the times.  Copies of my transcription may be found at the Bluegrass Heritage Museum and Clark County Public Library.

William won the court case.  However, in 1828 he lost the land to his nephew upon appeal.

Col. William McMillan (c1812) by Samuel Dearborn, said to be the first portraitist practicing in Kentucky.  The painting was made in Frankfort, possibly while the artist was in jail awaiting trial for murder.

McMillan Cemetery where William McMillan is buried along with his parents, James Sr. and Margaret.