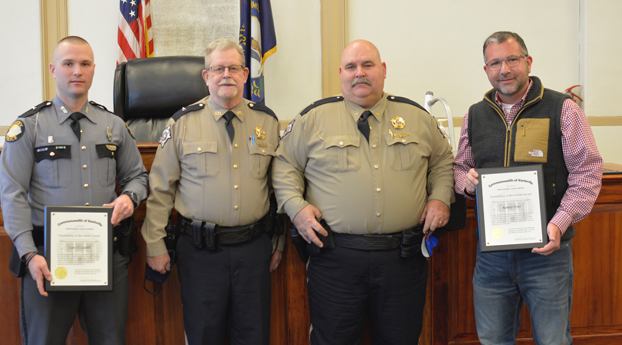 Last Oct. 26, Winchester City Commissioner Ramsey Flynn was returning to town from a Chamber of Commerce luncheon at Hall’s on the River when he noticed a police car stopped in the middle of Boonesboro Road and other cars were going around it. He knew something was wrong.

Flynn, a retired city firefighter and emergency medical technician, pulled in behind the car and asked the officer, Montgomery County Deputy Sheriff Carl “Charlie” Douglas if there was anything he could do for him. He could tell he was in bad shape.

“He was unaware of where he was,” Flynn said.

Flynn took the deputy’s keys because he was confused, and he didn’t want him to drive off.

“When I got him out of the car, he took a turn for the worse,” Flynn said.

Douglas tried to stand, but he collapsed, and Flynn dragged him out of the way of the traffic and laid him flat. The deputy was  in “extremely critical” condition, and his oxygen had dropped to a dangerous level.

Alyshia Powell-Martin and David Wills, who had also attended the chamber lunch, came up behind them and directed traffic around the vehicles, and a passerby stopped, and Flynn asked him to call 911.

Moments later, Trooper Casey Caudill of Clark County, who had been traveling from Winchester, happened to arrive on the scene, helped Flynn take Douglas’ vital signs, and stayed with them until an EMS crew arrived from Winchester minutes later and transported Douglas to the intensive care unit at Clark Regional Medical Center.

On Wednesday, in the circuit courtroom of the Montgomery County Courthouse, Sheriff David Charles honored Flynn and Caudill by presenting them plaques and giving a speech to a few who were gathered, including Douglas, his wife and other members of their family, and officers from the Montgomery County Sheriff’s Office and Kentucky State Police.

“There’s no way I can thank you enough,” Douglas said. “I wouldn’t be here if it wasn’t for these two gentlemen.”

“I’d do it anytime for you,” Flynn said.

Caudill said he was “humbled” as well as a little surprised because it was just the kind of thing a police officer does. He didn’t even tell anyone else about it that day, he said.

“I happened to be in the exact place at the right time,” he said.

While waiting for the presentation, Douglas and his wife, Lisa Smith-Douglas, talked with Flynn about that day. He still doesn’t know what happened to him. He said he had been “sick all weekend,” and that morning, he was attending a class at the Department of Criminal Justice Training at Eastern Kentucky University in Richmond and decided to go home around noon because he felt so bad.

“I got as far as Boonesboro Hill, and I couldn’t go any further. I thought I had pulled over on the side of the road,” he said. “I thought I was fine. The next thing I knew, Ramsey pulled up on the right side of me, and that should have told me right then something wasn’t right.”

When Flynn got him out of the car, he said, his legs gave way and he went down.

He doesn’t remember the conversation.

But, he said, he felt like those who were with him were taking good care of him.

“He was my guardian angel,” he said of Flynn.