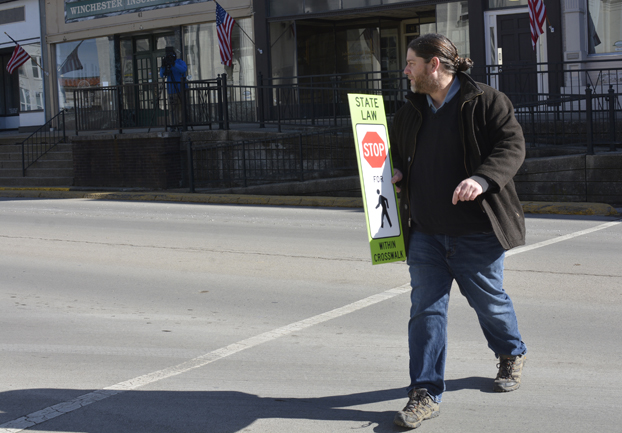 Chad Walker watches for cars as he walks across Main Street at the Court Street crosswalk carrying a sign. He and other business people want the state to improve the crosswalks.

Last January, Bob Tabor, 80, former owner of the Engine House Deli, was struck and severely injured by a pickup truck while crossing West Lexington Avenue on a rainy night at the crosswalk at Wall Alley.

A year later, some business owners are speaking out about the safety of crosswalks downtown, saying they want more visible paint, better signage, and better lighting.

But a preliminary draft report city officials received Friday from the state’s Department of Highways’ District 7 office recommends that markings and signs at “uncontrolled” crosswalks like the one where Tabor was hit should be removed altogether because they give pedestrians “a false sense of security when crossing.”

“Unmarked crossings have shown to be more effective in pedestrians exercising more caution while crossing,” the report said.

It suggests that the change be done in the spring of this year.

However, the report also suggests improved lighting by the city government and extending the curb on the on-street parking side of West Lexington Avenue to make it easier for drivers to see pedestrians. If the city did this, the state would consider adding warning signs.

Last Friday, a group of people downtown, led by Chad Walker, who now owns the Engine House on West Lexington with his wife, staged a demonstration, carrying highly visible pedestrian crossing signs as they walked the crosswalks.

Some vehicles didn’t yield, even though the walkers had the right of way.

Winchester Mayor Ed Burtner said that Main Street Winchester, including Walker, who is a board member, had gone before the Board of Commissioners requesting that he be allowed to make the improvements to downtown crosswalks at his own expense, but he was told that Main Street and Lexington Avenue are state highways, so it’s the state’s call.

The city also approached the state highways office about what could be done. A year later, they’re still awaiting a decision.

Walker and others, growing impatient, decided to bring the issue to the forefront by staging the protest last weekend and inviting local media and Lexington TV stations to cover it.

“The crosswalks in downtown Winchester are extremely dangerous,” Walker said, as shown by the “near fatal” accident involving Tabor.

He told the Sun that he and other business owners were asking for improvements before Tabor’s accident, but the accident was what gave their campaign more emphasis.

The state said there has only been one such accident downtown in five years, and that happened when it was dark and raining.

“It’s been a year now, and we haven’t gotten anything back from them and haven’t had any real progress,” Walker said.

He said he would like to see the state hire a contractor to put down fresh paint, possibly reflective paint, using a “ladder design” and place signs similar to the one he was carrying to “just make it more visible.” Or he would be willing to hire the contractor and do it to the state’s standards.

“This is a quick, easy fix. We could have this completed in two or three days,” he said.

Hillary Tabor, who works at the Engine House, said visibility is an issue as well as motorists “not thinking there is a crosswalk so close to a major intersection.”

Part of the problem, she said, is that cars go too fast on the section of West Lexington where her father was struck because they’re trying to get through the yellow light at Maple Street before it turns red. Yellow actually means slow down, not speed up.

Mason Rhodus, who owns an antique store near the corner of Main and Lexington, said speed is part of the problem, as well as drivers failing to yield to pedestrians who have the right of way at crosswalks. He said he has seen many accidents caused by people trying to beat the light, and he would like to see city police write more tickets so people understand it’s an issue.

“I myself have almost been hit several times,” he said.

Rhodus said his biggest concern is for all the elderly people who live in the former Brown-Proctor Hotel on the south corner of Main and Lexington.

Hillary Tabor said she wants her customers and those of other businesses to feel safe.

There is a caution sign near the crosswalk on West Lexington, but it’s hidden beneath an awning, and the main source of lighting, she said, is the lights from Speedway at Lexington and Maple, which gets quite a bit of foot traffic.

“If they take some away from us, there’s going to be a lot of jaywalking, which won’t help,” he said.

The state has collected data and done a comprehensive review of conditions to develop its recommendations on improving safety. The Distirct 7 office said it should have a plan compiled “in the next few months.”