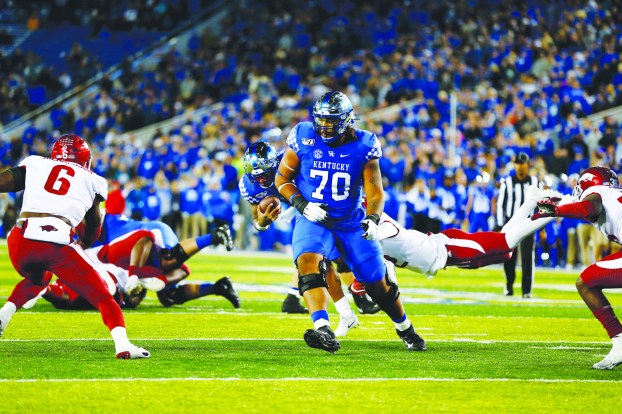 Darian Kinnard has made the decision to stay at UK rather than enter the NFL draft. - SEC Photo

Between the basketball team’s struggles and the transfer of receiver Wan’Dale Robinson from Nebraska, it’s been easy to forget about the decision All-American offensive tackle Darian Kinnard made to stay at Kentucky another year rather than go to the NFL.

Kinnard knows his return is a big boost for new offensive coordinator Liam Coen. With the departure of left tackle Landon Young and center Drake Jackson, Kinnard becomes the below on and off the field for the offensive line next season.

“I really think it’s going to help a lot. I mean, I’m not a selfish person. I’m not going to sit here and say I’m a big part of the offense but I think that when I’m on the field I definitely help my team and I play the best I can for my team, which ultimately is working towards the goal of getting that win at the end of the game,” Kinnard said.

“I feel like it’s just going to be a good opportunity to go out there, be a part of the unit and make sure I can play to the best of my ability every day and just keep improving.”

There’s already been talk of Kinnard shifting from right tackle to left tackle next season, a move he obviously believes he could make if that is what new offensive line coach Eric Wolford wants. Pro Football Focus ranked Kinnard as the top returning offensive linemen in college football for the 2021 season.

“I can play all four positions. I can play both guards, both tackles. It doesn’t matter to me. I’ve got the body of a guard and the arms of a tackle. I move just as well as any tackle,” Kinnard said.

“To me, this year is a finishing statement on the body of work I’ve been doing. At the end of the day, the NFL is going to put me where they want me and they’re going to be paying me to do a job so I’m going to get it done either way, it doesn’t matter. I’m just going to keep improving in whatever position and keep working.”

Kinnard was tempted to put his name into the NFL draft. Feedback from NFL personnel he received indicated he could be a second or third round pick.

“I just want to be able to come back and improve on all the feedback that I got from the NFL and make sure that there are no holes in my game. There is no reason for me not to be a lottery pick next year,” Kinnard said. “I’m just going to come back, bust my ass, play for this team and continue being the best teammate I can be.”

Kentucky recruiting coordinator Vince Marrow and head coach Mark Stoops went over the pros and cons of Kinnard leaving with the offensive lineman and his mother.

“You get these agents and they tell these guys they will be first round picks, and they are not,” Marrow said. “Give Mark credit. He will never tell a guy to go or stay. He will just help give them the right information. If you decide to go, he will support you 100 percent but also tell you he wants to make sure you graduate.

“I recruited Kinnard since he was a sophomore. I knew the info he was getting (from the NFL. I was talking to six or seven general managers. He had decent grades (on his evaluations) and if he had wanted to go to the NFL, I would be cheering for him. But I’m glad he’s back.”

Kinnard said weighing his NFL option was similar to making a college choice.

“You get talked to by agencies, get recruited to come out, train and work towards getting better to prep for the next level. It’s pretty similar to that but at the end of the day I know Marrow has my back 100 percent. He’s a great guy. I love him,” Kinnard said.

“I love all the coaches here. I know they all have my back and they want what is best for me. I know that if I went this year it would have been the same thing. I mean, it (Marrow’s pitch) was similar to another pitch but at the end of the day it had a lot more weight to both sides.”

Kinnard said knowing Coen, who has been an assistant coach with the Los Angeles Rams, was going to be the new offensive coordinator was a “little bit of a factor” in his decision to stay at UK.

“Just knowing we are going to have more of a NFL pro style offense to show my ability on the field did matter,” Kinnard said. “It’s more opportunity for me to evolve and get out of my comfort zone.”

“I sat down and talked to him. He is a good human being,” Kinnard said. “He reminds me a lot of the energy and type character coach (John) Schlarman had. I think it will be a great year with him.”