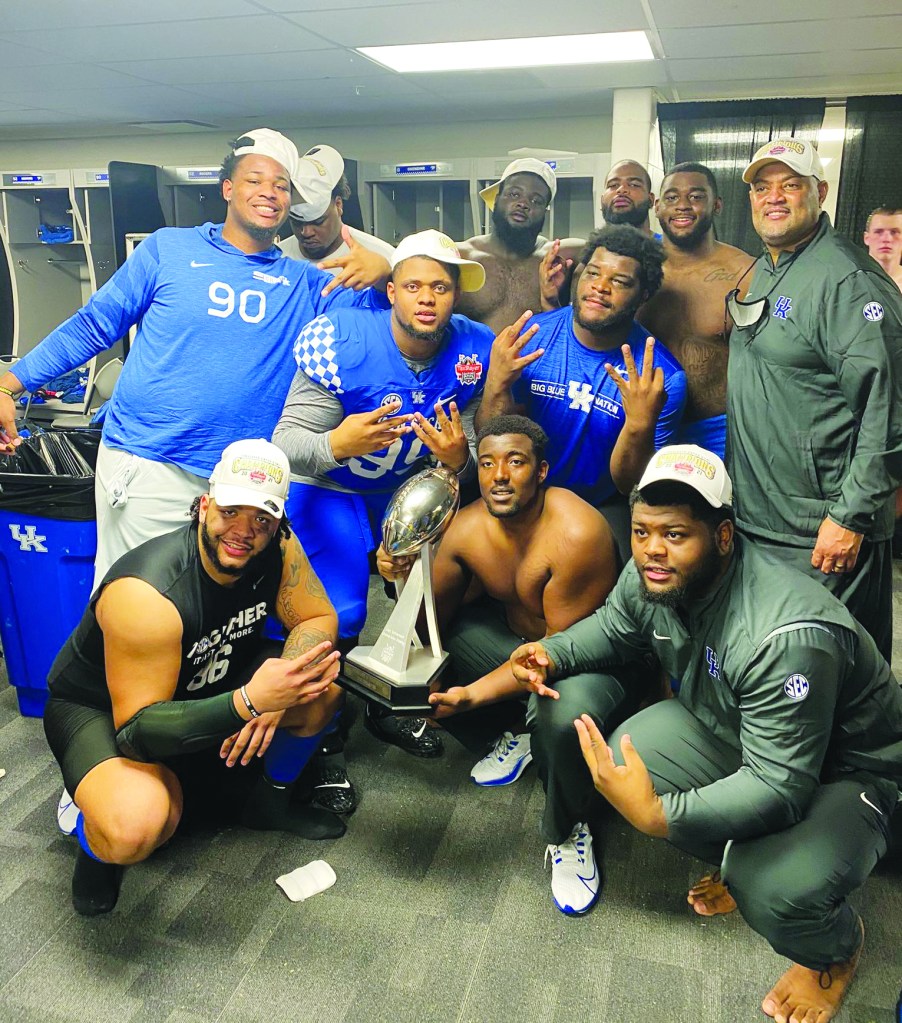 Defensive line coach Anwar Stewart, right, says not to worry about four true freshmen not playing a lot last season and believes all four have a “bright future” at UK. - UK Athletics Photo

Defensive lineman Justin Rogers was the highest rated recruit coach Mark Stoops has signed at Kentucky and one of the nation’s best defensive linemen in the 2020 recruiting class.

Kentucky also signed defensive linemen Josaih Hayes, Octavious Oxendine and Tre’Vonn Rybka in the same class and like Rogers were considered players who might make an impact in the 2020 season. Instead, they all played only sparingly.

Kentucky defensive line coach Anwar Stewart said not to worry about the four freshmen not playing or contributing more.

“You should be impressed,” Stewart said. “It is the SEC. They are pups, not grown yet. They were trying to adjust to everything around them. There was a lot for these young men to deal with this season.

“But we have a bright future with them. We have got to count on these guys coming up and they all need a hell of an offseason. But don’t worry. Our young men are growing.”

Stewart said the biggest reason they didn’t play more was that the veterans deserved the chance to play and played well.

“The freshmen got their opportunity in spurts and now it is their time to develop and grow,” Stewart said. “This is the SEC. This is an all-American conference. How many freshmen defensive linemen go into the SEC and start? Not many.

“Shame on me if I get them out there and they got hurt because they were not ready. They got in some and got some experience and now their time is coming to put up and really step their game up. That’s why we are excited about the future with them.”

Stewart knows all four wanted to play bigger roles last season and wants to recruit players who “want to ball” and succeed.

“If they won’t put the work in shame on you. You want them to be the best. That’s my job,” he said. “When they call and ask if they can get in extra work, I am like, ‘Heck yeah. Let’s roll.’ That is a student of the game. Those guys want to have an opportunity at the next level.

“The only things you can control are your effort and your attitude. If you have that you can be really good players and good young men after they graduate and are done here. I want them all to have that opportunity at the next level and those four know it is out there for them.”