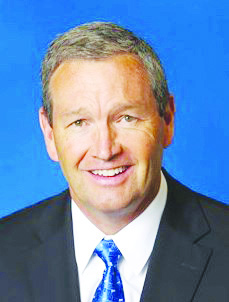 University of Kentucky Director of Athletics Mitch Barnhart has been named to the College Football Playoff Selection Committee for a three-year term.

“Mitch, Boo, Chris, Will and Joe will continue the integrity that has been the committee’s hallmark through our seven seasons,” said Bill Hancock, Executive Director of the CFP. “Their knowledge, experience and character, along with their love of the sport of college football, will make the transition seamless.”

In being named to the CFP Selection Committee, Barnhart adds to his leadership and impact in college athletics:

-He is chair of the NCAA Men’s Basketball Committee, which is responsible for the administration of the tournament in what is undoubtedly the most challenging year in the history of the event. His term on this committee expires following the 2021 tournament.

-He is chair of the of the Southeastern Conference Athletics Directors, now in his fourth year in that role.

-In his 19th year at Kentucky, he is the longest-termed AD in the Southeastern Conference and the second-longest among all Power 5 schools (only Joe Castiglione at Oklahoma has been AD longer).

-Barnhart’s leadership was noted in November in an analysis of the SEC by John Talty of AL.com, which stated, “In 2020, though, no SEC school carries as much influence as Kentucky.”

He was an original member of the SEC Network Content Committee, which was integral to the launch of the largest new cable channel in television history.