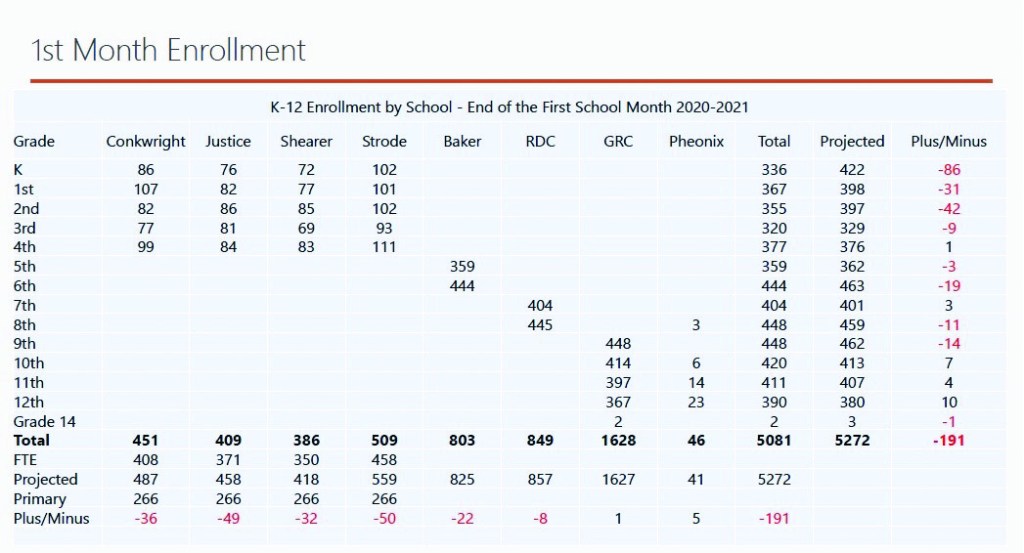 A slide presentation shows 191 fewer students in grades K-12 of the Clark County School District for the first month of enrollment in the 2020-2021 school year than were projected.

A decline of nearly 200 students has one of the Clark County school board’s newest members concerned.

Brenda Considine, a former teacher and administrator, commented on enrollment numbers presented by Christy Fulks Bush, director of pupil personnel and student support services, during a meeting of the board Tuesday night.

“The losses are devastating,” Considine said.

That could have a great impact on staffing allocations, which are tied to enrollment, she said.

Superintendent Paul Christy said many of those students are the children of faculty who have been placed in private school to provide day care. Teachers in the public schools aren’t allowed to bring their kids to class with them, but they’re learning online at home, and their parents are in the classroom.

“I think we’re getting closer and closer to getting kids back in right now,” Christy said, and when that happens, he thinks the children of public school teachers will return to public schools.

Another big factor, however, is the unusually large number of Clark County children who are in home school.

“I don’t think people realize how many home students we have within our county. It’s a large population,” she said.

“We have the equivalent of almost another elementary school.” Christy agreed.

Currently, that number is about 425 students, he said.

Christy said the district had been “making good headway” on getting home schooled kids into the public schools before the coronavirus pandemic, but when the virus came here, those number started going in the other direction again.

“Our goal is to get those students back,” Considine said.

Also during the meeting Tuesday, the board approved a request from the City of Winchester, made by Shanda Cecil, the stormwater program coordinator, to install a flood water retention basin on Robert D. Campbell Junior High School’s property at no cost to the school district.

It would be located between the running track and the old area technology center.

Cecil and Stephanie Blain of Palmer Engineering, who made the presentation, said the basin would relieve flooding nearby neighborhoods.

Blain said the water would be released from the basin during a storm event over the course of 24 to 48 hours.

Christy and Board Member William Taulbee had some concerns about safety and unsightliness, but Blain said the water would not get more than two feet deep, and deep, and she showed pictures of a similar basin the Winchester company had designed on a golf course that includes indigenous vegetation, so that it would look good and the school district would have to do minimal maintenance.

Board Member Sherry Richardson urged the board to approve the project, and she pointed out that it would include an educational component for RDC students to learn about ecology.

The proposal was approved unanimously.