Lessons from the winding creek 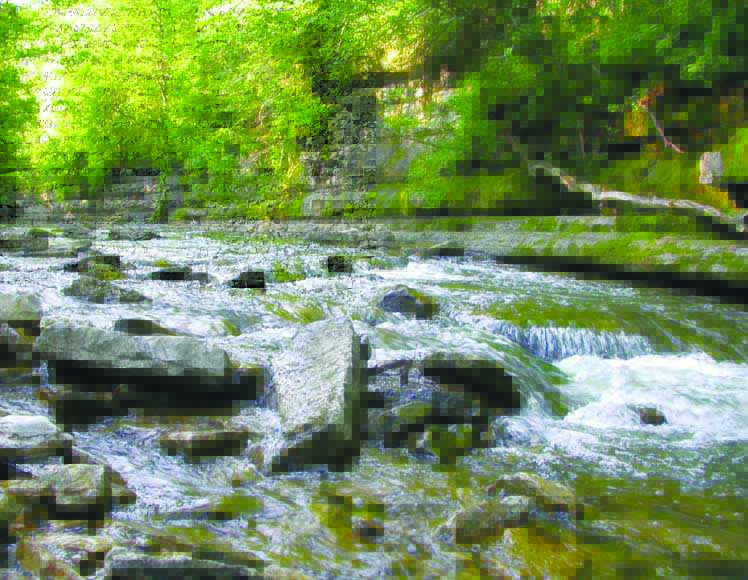 “The life in us is like the water in the river. It may rise this year higher than man has ever known it, and flood the parched uplands; even this may be the eventful year, which will drown out all our muskrats. It was not always dry land where we dwell.”

If you walk out my front door and down the hill, then push through the low-hanging tree limbs and step carefully through the blackberry brambles, you’ll soon find yourself at Lower Howard’s Creek, a little upstream from the Kentucky River. This little piece of waterfront is not much to look at, maybe 15 feet across at the widest. It flows beside the Old Stone Church, which claims to be the oldest church in Kentucky, and where people have been worshipping for over two centuries. But for most of my life, I’ve talked to God not inside the church but sitting on a large, flat piece of limestone right there beside the tributary.

This slice of water was close to the house I grew up in, and if ever there was a place where magic flows, it was this creek. As a child, I spent countless hours catching crawdads and picking the wild periwinkles that grew in the shady spots along the water’s edge. It was a place to find both fish, gleaming in the sunlight as they darted in the shallow water, and trash, the ever-present signs of pollution from uncaring humans. My brother and I would pack lunches and spend the whole day floating in inner tubes that we tied to trees so as to not drift too far downstream. There was danger too. A discarded piece of wood could be a boat or a coffin. Once, a water snake fell out of a tree above us and swam away so quickly I thought I had dreamed it, a moving S that was there one second and gone the next. At the end of the summer, my brother would be as brown as a berry, taking after the Native Americans in our patriarchal family tree. My genes tend toward the Irish and Scottish matriarchal side, so I was always in some state of freckling, burning, or peeling.

As an adult, I’ve witnessed this little waterway in every season and weather. I’ve watched it rush past during spring rains, eroding the creek bed in tumultuous eddies of reddish clay. Skated across it in winter, when the shallowest part froze solid. Whiled away summer hours staring up at the trees, the water stagnant and unmoving, the mosquitoes relentless. I’ve seen it dry as a bone during drought years.

The creek is both constant and ever-changing. Many of the rocks that line the bed are millions of years old, yet the creek today isn’t the same as the creek tomorrow. Just like, as Thoreau writes, the life in us.

Looking back on the last year, some days felt like a drought, lacking the wonder and traditions that give our days meaning. Perhaps we were bored stiff by the monotony, days and weeks bleeding into each other. Other days felt stormy and unrelenting. The more we struggled against the torrent, the more we were washed away. There was fear and rising water lines, but also beauty amidst the discarded beer cans and weed-choked hillside.

It’s been hard to see the bigger picture. From where I stand, all I see is a small creek. But pull back enough, and I can see that it’s one branch of a mighty river, and each river leads to the even mightier ocean. The strength of the collective is supported by each small, unique individual. For each individual is her own creek, air and water in a constant but ever-moving dance.

So we take where we are and what we can see and print those lessons on our heart.

Be still occasionally and listen to the babbling of the brook, the cosmic truths barely audible in the whispers of water.

Don’t fear the water’s rush, but respect it. Know when to stand against the fray and when to let the movement sweep you off your feet.

And above all, flow with the current and not against it, dodging rocks and trusting that a peaceful stretch is just around the bend.