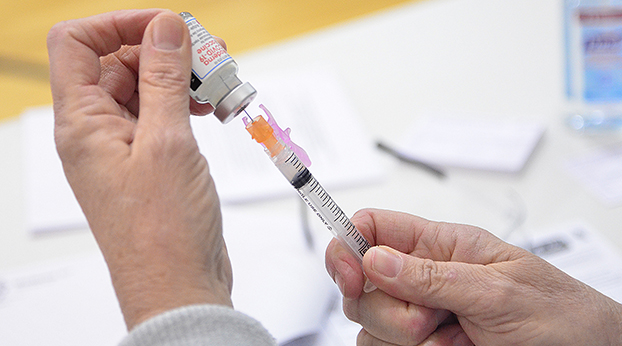 Across the country, the story is the same in many places. The issue isn’t that there aren’t enough health care workers to administer the coronavirus vaccinations. It is that there isn’t enough vaccine.

That is also the situation here in Winchester and in most of the state.

In late December, when the Clark County Health Department received its first shipment of the Moderna vaccine, it quickly began vaccinating front-line health care workers and emergency responders — paramedics and EMTs, firefighters, police, public health employees. They are now administering the second, or booster, shots to those same workers to get them from about 40 to 95 percent immunity.

About the same time that the health department began vaccinating health workers, Walgreens and CVS got the Pfizer vaccine and began administering it to nursing home residents and those in assisted ling centers including those at Fountain Circle and Rose Mary C. Brooks Place.

And this Saturday, at Robert D. Campbell Junior High School, the Health Department will conduct a mass vaccination clinic for public and private school employees with the help of school nurses from Clark County Public Schools and the Clark County Area Technology Center, as well as emergency medical personnel from the EMS and fire departments. That should be about 650 vaccinations.

As for the next phase, which includes independent seniors 70 years old and older, it’s anyone’s guess.

Public Health Director Becky Kissick said the only supply she has now is for the school workers and the second doses for health workers.

“I do not have any other vaccine available right now,” she said. “I don’t know when it’s coming, and I don’t know how many.”

She said she hopes to know more by early February.

On Wednesday, Gov. Andy Beshear, in his daily press briefing, said the federal government will increase each state’s supply of COVID-19 vaccines and will guarantee a minimum supply for three weeks.

“The top-line message on vaccines is the same as it has been: Our one issue is supply. If we had three issues, they would be supply and supply. We’ll figure out the distribution and we’re going to continue to improve. Our only limitation at this point is the number of doses we can get from the federal government,” Beshear said.

Kissick said Walgreens should be administering the second dose of the Pfizer vaccine to its elder care patients, probably next week.

At some point after that, she said, pharmacies, too, should begin opening up their vaccinations to the general public, following the Centers for Disease Control guidelines for different priority groups.

“I think our long-term plan in public health is that we see these vaccines rolling out similar to the way we’re rolling out flu shots,” she said.

Most people can go to their pharmacies and other places to be vaccinated for influenza, so coronavirus vaccinations may be the same.

“We’re just not there yet in terms of quantities and supply,” she said.

In the meantime, the Health Department has been taking information from seniors who have requested to be added to the list of people to be vaccinated.

People are calling the department at 744-4482, but its seven phone lines have been overwhelmed, Kissick said.

It has also set up an email box for those who send their requests to ClarkHDDoc@ky.gov.

As of Thursday evening, daily updates on vaccinations are available by calling the Clark County Vaccine Information Line at 859-745-7995.