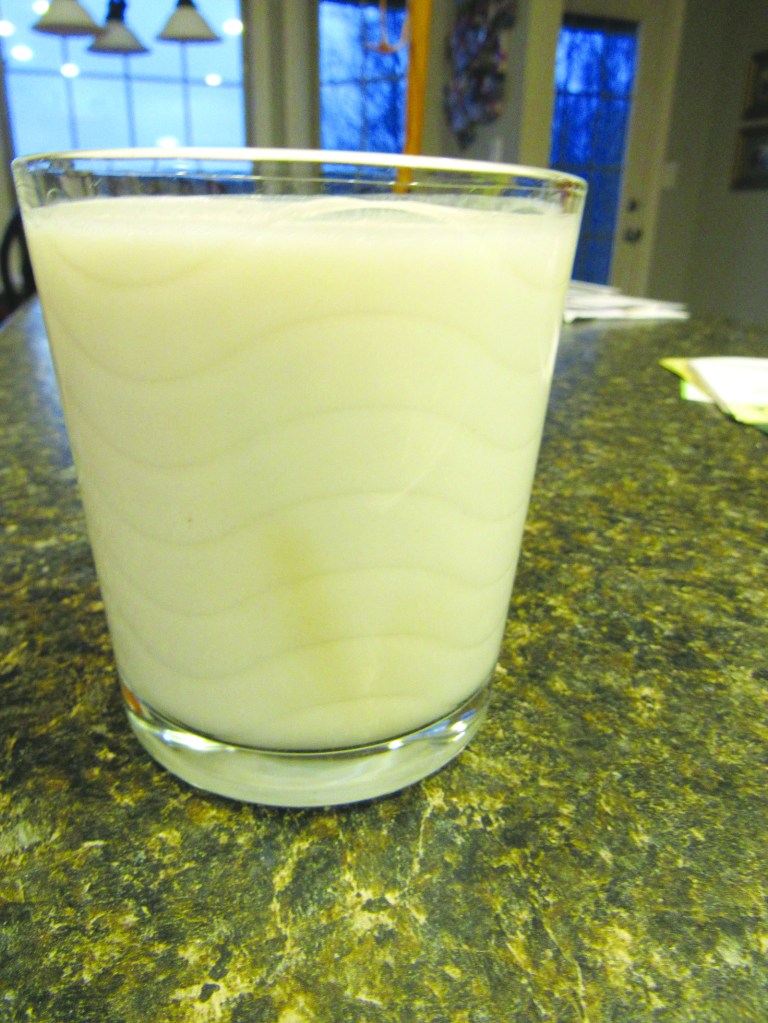 Combine lemon juice and sugar in a pitcher.  Stir until sugar is dissolved.

Add in water and chill for one hour.  This is to keep the ice cream from immediately melting in the blender.

Add lemon mixture and ice cream into a blender and blend until smooth.

Pour into glasses and garnish with lemon.

Place all ingredients in a blender; cover and process 15 seconds or until blended.  Serve immediately.

I’ve been going through some of the recipes I’ve clipped and saved over the year and have been throwing some of them away, wondering why in the world I kept it in the first place.

My friend Courtney introduced me to Chick-Fil-A’s frosted lemonade and I’ve been hooked every since.  Chick-Fil-A is my favorite fast food restaurant and I’m really glad we don’t have a franchise in Winchester because I’d be there all the time. When I do visit, I only allow my self to get a frosted lemonade occasionally; that way they are a real treat – and besides that they have way too many calories.

While going through my folder of beverage recipes, I ran across this one for copycat frosted lemonade from the mildlymeandering.com website and I had to try it. I mean I had to try it right then, immediately. I did decide not to make the whole recipe, since it makes four servings. I just made one-fourth of the recipe. If it didn’t measure up, I hadn’t wasted ingredients, and if it did, I didn’t drink four servings.

I squeezed one lemon, which produced just enough lemon juice, and added two tablespoons of sugar to my single-serving blender container. I blended the mixture until the sugar was dissolved.

I didn’t want to wait for the mixture to chill in the refrigerator, so I prepared some ice water and let it sit for about 10 minutes then poured one-half cup plus two tablespoons of it into the blender. Next, I scooped in one-half cup of vanilla ice cream.

It only took a few seconds for the mixture to blend. When I looked inside, the mixture was not thick and creamy. It was very watery so I added another one-half cup of vanilla ice cream and turned on the blender a few more seconds.

The mixture was thicker and I poured it into my glass. I turned it up to take a drink and decided it had a pretty good flavor, but wasn’t like what you buy at the restaurant. The flavor wasn’t quite right and neither was the texture or the frozenness. If you love Chick-Fil-A frosted lemonade like I do, don’t bother trying this copycat recipe. You’ll be as disappointed as I was.

While going through my beverage recipes I also found one for strawberry lemonade smoothies from the October 2013 issue of Taste of Home magazine, and thought I’d give it a try. I picked up a single container of lemon yogurt on my next visit to the grocery. I don’t like yogurt and was afraid it would make the smoothie sour, but I know lots of smoothie recipes call for yogurt.

When I got home, I made some lemonade from a mix and let it chill so I’d be prepared to make this smoothie.  Instead of trying to make just one serving, I decided I’d make all four servings of this recipe and place what I didn’t drink into the freezer for later.

I poured all of the ingredients into my blender and turned it on for 15 seconds. The frozen strawberries weren’t all chopped up so I turned it on for a few more seconds. After filling a small glass with the beverage, I took a sip. It was pretty good; however, it was very lemony. I could barely taste the strawberries. It wasn’t as thick as a smoothie usually is, but on the plus side I didn’t taste sour yogurt either.

I’m kind of on the fence about this recipe. I wouldn’t say it was a Failed It, but it isn’t something I’m dying to make again. I did place the leftovers in the freezer for later.

Once it thawed a little, and I blended it in the blender for a few seconds, it was more the consistency of a smoothie, but still more lemony than anything. On second thought, I don’t think I’ll be adding this recipe to my self-made cook book. I’ll just say this is another Failed It.