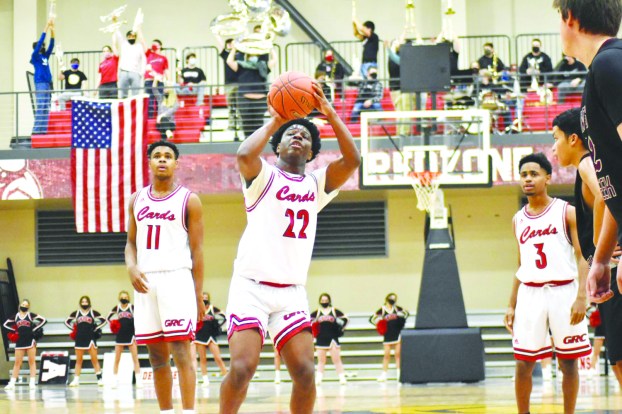 Basketball Cards off to 8-0 start

Soaring through team after team, the Cardinals are off to an incredible 8-0 start. This is the best start of coach Josh Cook’s career at GRC and the best start to any George Rogers Clark boys basketball team since 2009/10.

“I’m just so thankful for the opportunities I’ve had while coaching at GRC,” says Cook. “I’m so thankful for each and every one of my past and present players. They have shaped this program into what it is today. Achievements like these don’t come around very often and it’s wonderful to be able to bring them home for Clark County, especially with this special group of kids.”

Not only has GRC’s season started with an abundance of wins, but they achieved their 2,000th win on Jan. 16 against Great Crossing.

This is a huge achievement for Clark County as that win makes GRC one of the very few teams in the state of Kentucky to reach 2,000 career wins. The overall program record now is 2,002-997.

GRC is currently ranked first in the 10th Region and depending on what poll you look at, the Cardinals range from sixth to tenth in the state rankings.

It’s crystal clear that the Cards are a top 10 caliber team with their impressive resume so far.

“We are focusing on one game at a time,” says senior wing Reed Johnson. “All of our intentions are to get better every day we step into that gym.”

The Cards are averaging a whopping 89.8 points a game, with their lowest scoring game being an 86-48 win against Pulaski County.

It’s not just these four though; the whole team is contributing to the success.

Players like Sammy Hernandez, Stanley Smothers, Reed Johnson, and Jeremiah Mundy are playing in unity, and truly embodying what it means to put the team first.

While the Cardinals are having tons of success on the offensive side of the ball, they are also dominating on the defensive side as well, only allowing 56.3 points per game.

On numerous occasions the Cardinal defense has held their opponent’s best players to minimal scoring.

“With an unexpected end to our season last year, I think everyone just wants to show how bad we want another shot at playing at Rupp Arena,” says Hernandez. “We have a tough road ahead of us, but I think we are improving every practice and finding out more and more about ourselves as a team.”

Achievements keep rolling in for the Cardinals this year.

Unfortunately, due to an injury sustained in the Pulaski County game, Morton will be out for a few weeks.

Obviously you can’t replace a sensation like Morton, but Cook knows his players will step up and fill his shoes.

“It’s so unfortunate losing a player like Jerone for any period of time,” says Cook. “He’s arguably one of the top players in the state of Kentucky. We’re going to use this time to improve and continue competing as a team. We can’t replace Jerone, but guys can step up and expand their roles for the time being. We are praying Jerone has a smooth and quick recovery and are looking forward to his return.”

Although it’s early in the season, the future’s looking bright for GRC.

After all, success is just the Cardinal way.