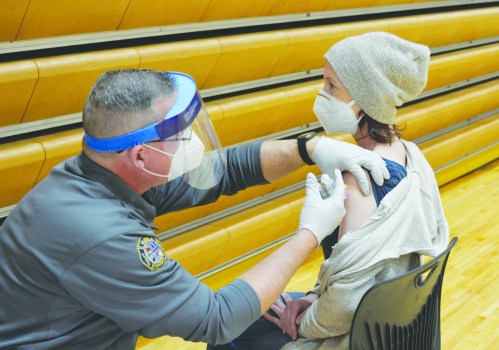 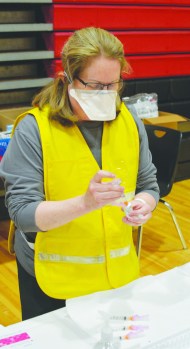 Hundreds of teachers, cafeteria workers and other school employees were vaccinated Saturday to protect them against the coronavirus.

She said there are about 1,000 school employees, and about 600 signed up for the vaccination clinic.

“We’ve had some phone calls today from some folks who weren’t going to be able to make it and who asked if we could add them onto the list” to get their shots later, she said, but the more they could do that day, the better.

Superintendent Paul Christy had said before the clinic that there would be enough vaccine for every school employee who wanted it.

Teacher Jennifer Bellando had “mixed emotions” about getting the vaccine because of her health.

“I’m excited because I feel I’m joining in on a team effort to do something for the better good. Fighting the disease, the virus, is important to me,” she said. “On a personal note, I’m apprehensive. I have auto-immune disorder, and I’m operating on faith and science.”

Even though she was getting the vaccine, she said, she is still nervous about returning to classrooms with children this school year.

“I would feel better about it next fall,” she said.

“It’s actually been a tremendous learning opportunity” for teachers and students, she said. “The way I’ve looked at it is we’ve all ben thrown into this situation, and we all have lessons to learn,” she said.

Paige Adams, a biology teacher at George Rogers Clark High School, who got her first shot Saturday, misses the in-person interaction with her students.

She said she told her husband Friday she probably couldn’t identify some of her students because she doesn’t get to see them.

“It’s so sad. Last year I could name every single one of my students. … So, yeah, I’ll be happy when we get to go back,” she said.

She was also pleased to get the vaccine.

“This has been a really hard time, and I’m glad to be a part of, hopefully, getting to an end of this,” she said. “I’m really grateful.”

School employees still need a second round in about 28 days to get them to an estimated 95 percent immunity rate.

Christy, who was at RDC Saturday, said he wants to get students back in school as soon as it’s safe to do so.

The vaccinations should bring the schools closer to that goal.

For now, students are scheduled to return to classes Feb. 22. However, Christy told school board members Jan. 19 he’s hopeful that if the county’s incidence rate continues to decline, it could be sooner.

What in-person learning looks like when it does happen, he said, is a conversation he and other school officials need to have with board members. He said the governor’s guidelines have changed to allow school districts in the red zone (25 or more cases per 100,000 population) to return to classes under a “modified hybrid” plan that allows even fewer than half of students in the buildings at a time.

The superintendent said he doesn’t like that option because it would “dramatically slow down instruction.”

Kissick said she doesn’t know when school children will be able to get their vaccines. The next priority group scheduled to be vaccinated are seniors 70 and older, and the Health Department is putting people on a wait list because there isn’t enough vaccine yet to do those because of distribution delays.