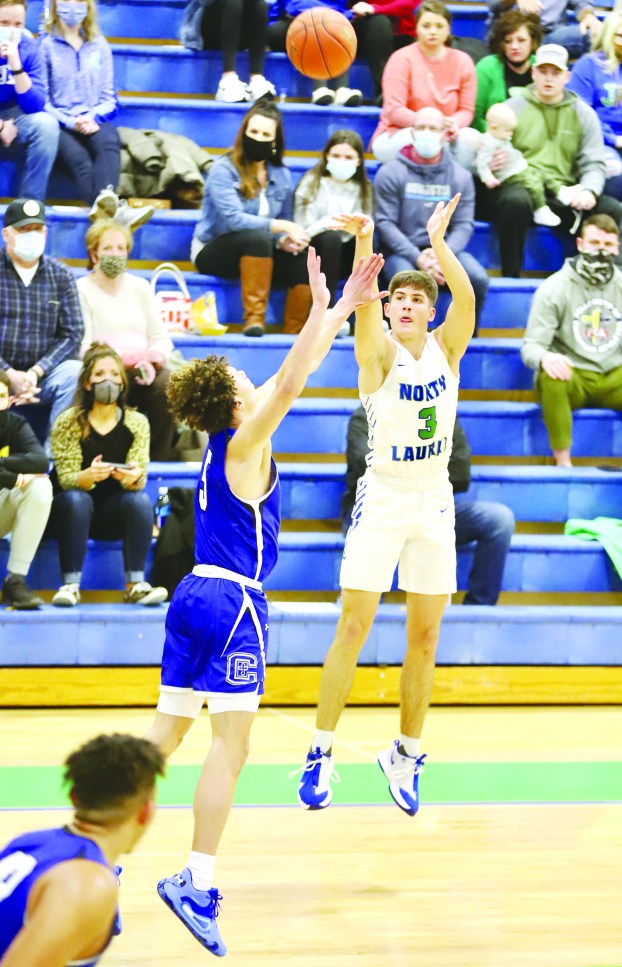 Reed Sheppard even better than expected to be this season

His coach thought Reed Sheppard would be a better player this year and also expected more statewide attention to be focused on him as he did improve.

Sheppard averaged 20.6 points and 5.2 rebounds for North Laurel as a freshman. He shot 50.4 percent overall from the field, 34 percent from 3-point range and 77 percent at the foul line while scoring 660 points.

And he just happens to be the son of former University of Kentucky standouts Stacey Reed Sheppard and Jeff Sheppard, the MVP of UK’s 1998 Final Four national championship team.

“He had a great offseason and knew he was primed to have a good year,” North Laurel coach Nate Valentine said. “I just didn’t know how good because we didn’t have summer ball and no preseason scrimmages. We went into the season kind of blind but he’s been great and our team has been great. I have certainly been surprised by the attention and coverage we have got. There is a lot of interest in our team and Reed.”

North Laurel averaged a state-best 95 points while winning its first eight games, including an eye-opening 89-87 win over Covington Catholic when Sheppard had 45 points and 12 rebounds. Five times in nine games North scored 98 or more points.

“We are small but we are fast. The only way we can play is fast,” Valentine said. “We don’t make scoring 100 points a goal. We beat Madison Southern by 24 points and scored 82. Our guys were disappointed. I told them our expectations were not to win by 40 and score 100 every night. It’s great if it does but we should not be disappointed if it does not happen.”

The 6-1 Sheppard is averaging 31 points and eight rebounds per game. He’s hitting 41 percent from 3-point range and 86.2 percent at the foul line. In a win over rival South Laurel last week, he had a triple-double with 50 points, 11 assists and 10 rebounds and came back the next night with 30 points, nine rebounds and eight assists in a win over Madison Central.

“Reed is such a good passer. Everybody looks at his scoring but he is one of the best passers I have seen. He has great court vision and is so unselfish,” Valentine said. “We have got guys around him that can make open shots. He helps them and they help him.”

Sheppard put on about 10 pounds and was one of a small group of players that managed to work out on their twice a day even during the pandemic. Valentine said players even built their own devices so they could lift weights.

“Reed’s mental approach to the game is at a higher level. He has a better understanding of where he wants to be three years and beyond and what it takes to get there,” Valentine said. “He was a good shooter last year but with age and strength he’s better this year. He worked on his outside shot a lot. He’s making a lot more 3’s than last year and is a more consistent shooter.

“But the thing he does really well is he gets to the basket and finishes. He makes a lot of tough shots most high school kids don’t make.”

Iowa was Sheppard’s first Power Five offer two weeks ago. Two former UK coaches who Jeff Shepherd played for have also offered. Rick Pitino gave him an Iona offer and Tubby Smith did the same at High Point. South Alabama and Stetson have also offered scholarships to Sheppard, who had a quadruple double as a freshman with 24 points, 10 rebounds, 10 steals and 14 assists.

“He’s going to eventually have a long list of offers,” Valentine said. “I get calls from college coaches about every day. Coaches are in a phase now where they cannot contact him so all communication goes through me. But that’s a good problem to have.

“COVID has forced everyone to get all games online, something high schools and even AAU should probably have done 10 years ago. College coaches probably have more access to watch more kids now than ever, just not in person. I get three or four texts after every game from coaches wanting to know where they can download the game video.

“One of the really nice things is that some teams we have played have been Reed’s biggest promoter. A college coach will call them and they will tell coaches they need to be recruiting Reed. That has happened at least three or four times that I know of.”

BY LARRY VAUGHT Vaught’s Views Kentucky is bringing in offensive coordinator Liam Coen to implement a pro-style offense like he... read more