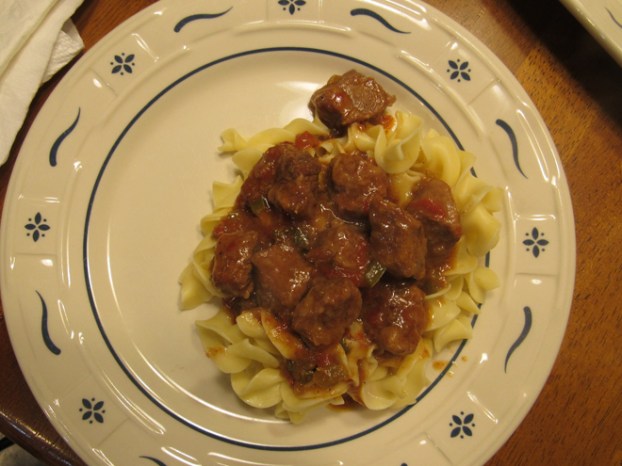 [Nailed It or Failed It logo]

Combine flour, salt and pepper in a bag. Season beef cubes by shaking in the bag of flour mixture then brown beef in oil in a large skillet.  Remove meat.  Sauté onion, pepper and celery until soft. Stir remaining flour into vegetables. Slowly add bouillon and remaining ingredients and cook until blended.  Pour all ingredients into a large casserole and bake uncovered at 325 degrees for 2 hours. Serve with rice or noodles. Serves eight.

Today’s recipe was taken from the inside label of Del Fratelli crushed tomatoes. I’m sure I’ve had the recipe for a while and since I have several chuck roasts in the freezer, it was a good time to use one of them.

After thawing a 3 1/2-pound roast, I cut away as much fat as I could. If you don’t mind the fat meat, you don’t have to trim it off. I cubed the entire roast and placed it in a zippered bag with the flour, salt, and black pepper and gave it several good shakes to coat each piece of meat.  I let the meat set in the bag while I chopped the onion, pepper and celery. Once all the vegetables were chopped, I heated a large skillet and added the cubed beef a little at a time.  I had so much meat I had three batches to brown and ended up having to add additional oil about half way through. As pieces browned, I placed them on a plate. I browned each cube on all sides and didn’t care that it wasn’t completely done; I knew it would finish cooking in the oven later on. Once all the meat was brown, which took a while, I added the chopped vegetables to the pan and let them cook until they were soft then dumped in the remaining flour mixture and gave the vegetables a good stir.

While the vegetables were cooking, I’d dissolved the beef bullion in a 2-cup measuring cup with the water and added the paprika, Worcestershire, parsley and garlic. I did this just so it would be easier to pour into the vegetables.  After the flour was added to the pan of vegetables, I gently poured in the bullion mixture and then poured in crushed tomatoes that we’d canned from our garden.  Instead of beer I added 1 1/2 cups water.  Once those ingredients came together with a gentle stir, I added all of the browned pieces of chuck roast and continued stirring until it was incorporated. I did not pour the mixture into a large casserole to bake, I just slid my large skillet full of great smelling stuff into the oven. I set the timer for 2 hours and anxiously awaited supper time.

One of my favorite pastas is egg noodles, so that’s what I prepared to go with this beef ragout. The noodles were done just as the meat was coming out of the oven.  I removed the large heavy skillet from the oven and set it on the table so we could serve ourselves right from the pan.

I called Brad into the kitchen so we could eat. He said a prayer, and then we both scooped some noodles onto our plates and topped the noodles with beef ragout.

The dish was oven hot so I had to let mine cool just a bit, but it was certainly worth the wait. I loved this dish. I don’t like gravy and was afraid this would just be beef with gravy mixed in. Boy was I wrong.  Brad and I both enjoyed this meal, and there was plenty of leftovers — enough for two more suppers and one lunch. The recipe said it would feed eight and that is no lie.  I’m not sure, but Brad may have gotten a little tired of this dish after the third time, but I didn’t.  I love leftovers!

This dish definitely falls into the Nailed It category and will be added to my self-made cookbook and labeled as comfort food. It just really hit the spot and I’m already looking forward to the time when we can invite friends over to break bread and fill their tummies with this yummy dish.