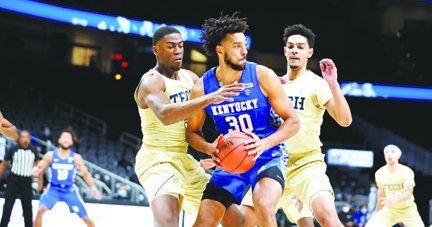 Olivier Sarr has been overwhelmed at times by the pressure he's faced at Kentucky compared to playing in the ACC. - Photo by Vicky Graff

Sarr not as productive, consistent as expected

Since Olivier Sarr was a third-team all-ACC player for Wake Forest last season, his transfer to Kentucky was expected to give the Wildcats a veteran and consistent player.

Instead, he’s not been nearly as productive as expected and much more inconsistent than anticipated. He is averaging 10.3 points and 5.9 rebounds per game and shooting 47 percent from the field.

Sarr says one reason is because the press at Kentucky is far greater than anything he was used to in the ACC.

“It’s still the same game, but you get more pressure at Kentucky, I think. There’s more outside pressure. There’s more expectations and you can feel that as a player. I mean, it’s good preparation for the next level, but it takes some time to adapt and get used to it,” Sarr said.

He said the ACC and SEC have different styles of play.

“I think it’s more athletic in this league. You don’t play against big centers that much. There’s a couple of teams that have big centers, but not as much as in the ACC. But other than that, I mean, the style of play is a little bit different,” Sarr said.

Assistant coach Bruiser Flint came to UK from Indiana this year but he knows how intense the pressure is for Kentucky players.

“The expectations are extremely high. I think sometimes they get a little crazy, but that’s what you sign up for. You love to have fans like that, but it can get a little out of hand with social media,” Flint said. “Today these kids read that stuff and it affects them, so you’ve got to be a little bit more sensitive to it and we talk to them all the time about, ‘Stay off reading about that stuff.’ But it’s hard with these kids. That’s what they grew up doing.”

Flint believes Sarr has the same problem some freshmen have — he’s lost confidence in his abilities.

“With Olivier, ‘Hey, believe what you’re doing.’ The kid has a great skill level. He’s a great kid. He works at it. You’ve just got to believe in what you’re doing,” Flint said. “This was a big leap for him too, coming in from Wake Forest to Kentucky. The pressure is totally different and how people perceive how you play.

“And if you don’t think that plays a part in it, then you’re crazy.  I think the last couple of weeks, I think he’s feeling a lot more comfortable than he was and you can see it in his play a little bit. A lot more consistent.”

BY LARRY VAUGHT Vaught’s Views Kentucky is bringing in offensive coordinator Liam Coen to implement a pro-style offense like he... read more