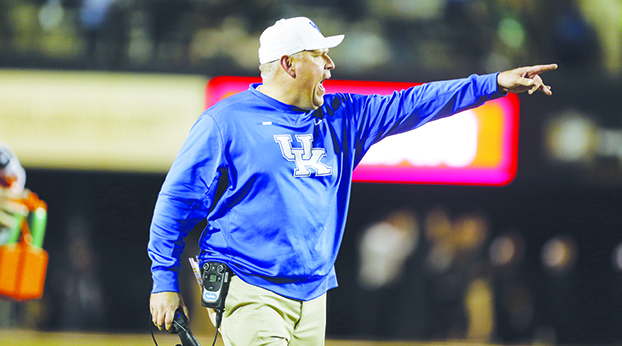 ohn Schlarman was the “perfect winner” of the Herald-Leader Sports Figure of the Year. - UK Athletics Photo

It’s understandable that LeeAnne Schlarman had mixed feelings when she found out her late husband, John Schlarman, was named the Herald-Leader Kentucky Sports Figure of the Year.

John Schlarman played football at Kentucky. Later he was a graduate assistant coach at UK. He came back to UK as offensive line coach eight years ago when Mark Stoops came to Kentucky.

Schlarman, 45, lost a two-plus year battle with cancer at midseason. His last game on the field was UK’s win at Tennessee when Stoops gave him the game ball.

“John sort of fits the year and the story of somebody battling adversity and in many ways triumphing against adversity,” said Herald-Leader columnist Mark Story. “He won by the biggest margin in the last four years.”

LeeAnne and her four children were “super proud” of having him win the award.

“I know it would mean a lot to him but he would rather fly under the radar and just do his job,” LeeAnne said. “He worked hard and deserved it. He had a great run here and he would be proud he got it.”

She said her children still do not get the significance of the award.

“The oldest boy, a lot of his friends and coaches have said stuff to him,” LeeAnne said. “I have heard from a lot of people since the award came out. Everybody has been very supportive and said he deserved it and was the No. 1 pick.”

I wasn’t sure LeeAnne would even want to comment on the award. It’s less than three months since her husband passed but she said he would “want me to share” the story.

She said the family was “doing good” and trying to just stay busy.

She found the perfect spot in Florida — a blueberry farm owned by former Wildcat Jason Watts.

“Jason gave us the most amazing trip and we had so much fun,” LeeAnne said. “He’s right outside of Orlando and has one of the largest blueberry farms in North America. He lives on a ranch and works his tail off. He has a wonderful family.

“He’s been really supportive. He touches base and checks on us regularly. His wife is just wonderful. We had kind of lost touch with him and then when John got sick, he was really there for John. He came to the funeral and told us then if we ever wanted to get away, let him know and we took him up on that offer.”

The family also took the opportunity to attend UK games after John Schlarman’s death, including the Vanderbilt game when UK opened the game with an empty spot at left guard — the position Schlarman played at UK. Next Landon Young, one of Schlarman’s recruits, came on the field wearing No. 65 — Schlarman’s number.

“I loved his players so much. They meant so much to John so I wanted to be there for them, but I also felt some peace there, too,” she said. “There was so much support. It was definitely hard going but it is what we needed and I knew John would want us to be there.

“(Coach Mark) Stoops shared his suite. The boys had a great time and the players and every one of us really were so supportive. I didn’t even know the missing player thing was going to happen. I asked, ‘What are they doing when the spot was empty?’ They are just a special, special group of guys. That’s how they roll and I loved it.”

Those linemen learned life lessons along with football from Schlarman. Recruiting coordinator Vince Marrow said it was the same for the coaches when it came to Schlarman.

“That was John. He didn’t want to go but he was ready,” LeeAnne said. “He never complained. He just took it as it came. It sucks …. because he was such a good one.”

Sarr not as productive, consistent as expected