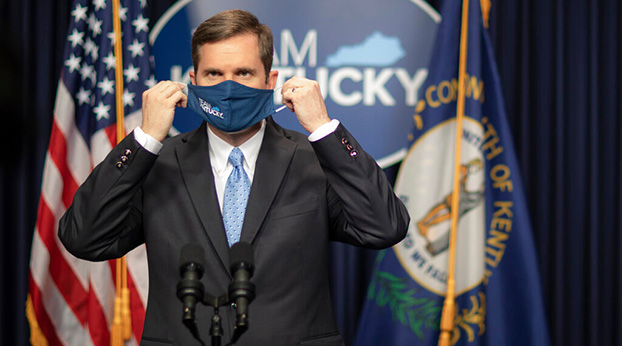 Gov. Andy Beshear won a partial first-round victory on Wednesday in his lawsuit to have three bills passed by the General Assembly over his veto declared unconstitutional.

A hearing was held before Judge Phillip Shepherd at Franklin Circuit Court Wednesday on a motion by the governor to issue a temporary restraining order on the three bills.

Shepherd noted that Senate Bill 1, which places limits on the governor’s power to issue executive orders during an emergency, and Senate Bill 2, which provides more legislative oversight of emergency administrative regulations can wait for further action.

But he held it’s a different story with House Bill 1, which allows all businesses, schools, non-profit organizations and churches to make their own rules by adopting “an operating plan” that complies with “guidance” published by the federal Center for Disease Control “or the executive branch, whichever is least restrictive.” House Bill 1 also has an emergency clause that makes the legislation effective immediately upon final enactment, which includes overriding the veto.

In his nine-page ruling, Shepherd said House Bill 1, “could create chaos and undermine any effective enforcement of public health standards to prevent the spread of this deadly disease during this pandemic. Moreover, in the absence of injunctive relief, it appears that these provisions of House Bill 1 could likely wreak havoc with public health.

“Under the provisions of House Bill 1, it is likely that hundreds, or even thousands, of individual operating plans could be adopted, with no meaningful oversight or review, and with great variations as to the rules that would apply throughout the state. The governor’s power—indeed, duty—to effectively enforce any uniform public health standards would be severely undermined, if not destroyed.”

While taking no action on the other two bills, Shepherd ruled, “The Court finds that the governor has presented a substantial legal issue on the merits of those questions regarding House Bill 1, that the public interest demands a delay in implementation of that portion of the legislation, that immediate implementation of that portion of House Bill 1 would pose a clear and present danger to public health and would undermine any effective public health strategy to contain COVID19, and that the balance of the equities and public interest weigh heavily in favor of issuance of a temporary restraining order on this limited point.”

He also set a hearing on the motion for a temporary injunction at 9 a.m. on Thursday, February 18.

After learning of the ruling, Beshear said, “I have taken difficult but necessary steps to stop the spread of COVID and save lives in Kentucky. Today, the Franklin Circuit Court’s order stated that House Bill 1 would ‘create chaos and undermine any effective enforcement of public health standards to prevent the spread of this deadly disease during this pandemic.’ I don’t use emergency powers because I want to. I use them because it is my duty to preserve the lives of Kentuckians.”

Senate President Robert Stivers had this statement after the ruling.

“The denial of the restraining order and injunctive relief concerning Senate Bills 1 and 2 is the appropriate ruling. We want to look further into the restraining order and injunctive relief on House Bill 1 to better understand Judge Shepherd’s rationale,” he said. “However, it is apparent from the court’s ruling that the majority of the actions of the General Assembly were within the law.”

Kentucky on track to be first state to vaccinate educators