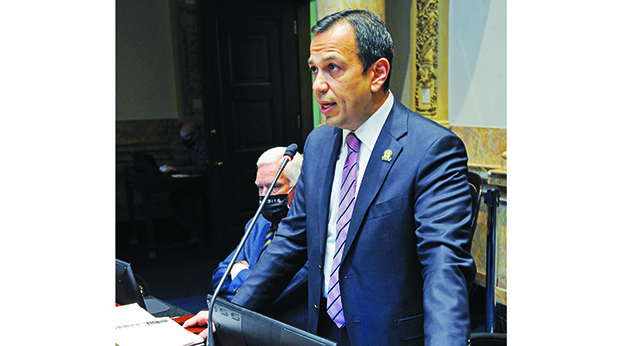 Weeks after the Kentucky Court of Appeals affirmed a city employee can hold an elected county office, Clark County’s state senator filed a bill to prohibit the practice.

State law already bans one person from simultaneously holding a municipal office and a county office. Alvarado’s amendment would add, “nor shall he or she be an officer of one and an employee of another.”

Alvarado said he filed the bill based on the January Court of Appeals ruling. That case involved Travis Thompson, who works as a Winchester Police officer and was elected as a magistrate to the Clark County Fiscal Court in 2018.

After speaking with other legislators, Alvarado said they have seen similar situations in their districts. Alvarado said judicial committee members said the ruling could potentially allow a municipal police officer to be elected sheriff, he said.

“This (ruling), in my opinion, has opened a potential conflict,” Alvarado said.

The statute has been amended a number of times through the years, based on other rulings.

“The court has issued a recent ruling that changed the analysis of the law,” he said. “It prompted some concern about what we do.”

For the last two years, there has been a legal battle in Clark County as to whether it was legal for Travis Thompson to work as a Winchester Police officer after being elected to the Clark County Fiscal Court as a magistrate.

Alvarado said the bill was not filed specifically because of the Clark County case, but it has generated significant interest in social media.

“A lot of people in our community think it’s about one individual,” Alvarado said. “That’s not my motive.”

“My interest is we have a court ruling … that opens potential other conflicts.”

The issue was raised by Clark County Attorney William Elkins after Thompson was sworn in as a magistrate. Elkins maintained Thompson was an officer of the city, though Thompson and the city said a police officer is a city employee, not an office-holder within city government.

In August 2019, Clark Circuit Judge Brandy Oliver Brown ruled that a police officer is an employee. The Court of Appeals affirmed that decision in January 2021, and cited an 1890 statute requiring that all non-elected city offices be created by ordinance with duties, title, bond and an oath. The justices found no such city ordinance for police officers.

The justices also said there is no constitutional incompatibility between being a police officer and an elected magistrate.

Thompson was re-hired by the Winchester Police Department in September 2018, while he was still campaigning for magistrate. He was elected to the position in November 2018.

They city also obtained two opinions from the Kentucky League of Cities and the Kentucky Attorney General’s office saying the two positions were not incompatible.

Alvarado said his bill may not make it to a vote during this session, but he hopes it will prompt further conversation about the situation.