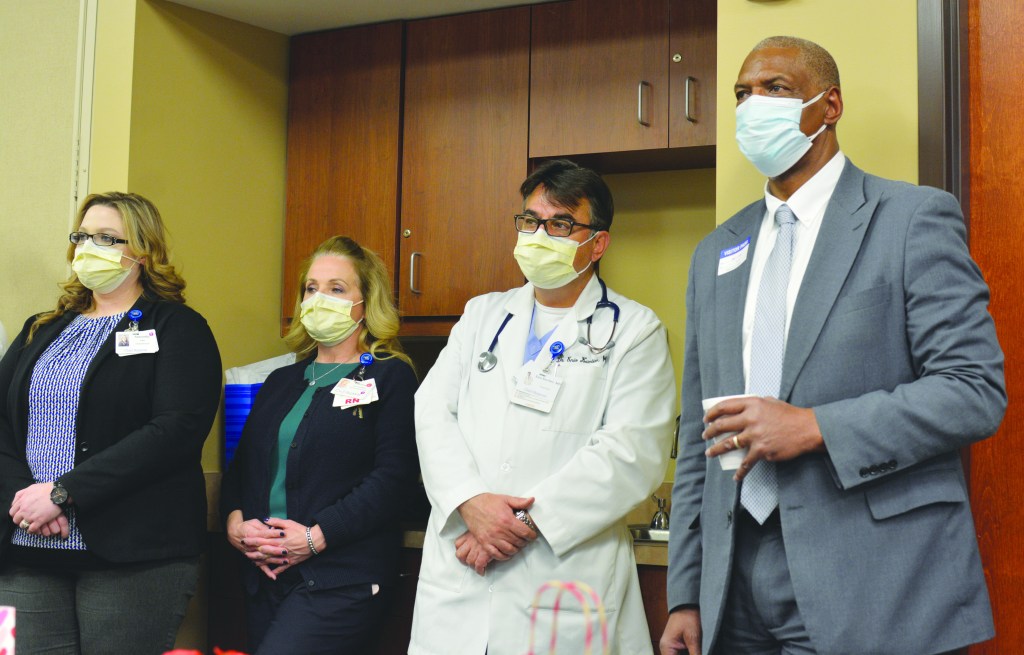 Representatives of Clark Regional Medical Center listen to one of the doctors speak at a cath lab celebration ceremony in January. From left to right are Samantha Patrick, chief financial officer of the hospital; Barbara Kinder, chief nursing officer, Dr. Enio Kuvliev; and Raymond Smith, board chairman, Clark Regional Medical Center. Patrick has not received the vaccine, and Smith did not receive his at the hospital, but other board members have.

In Kentucky and throughout the country, delays in production and distribution of COVID-19 vaccines have resulted in long waits for older people and others who are most vulnerable to the coronavirus disease.

Meanwhile, hospital trustees, board members and donors have gotten early access to the vaccines, raising questions about favoritism regarding who gets inoculated and when, The Associated Press reported Jan. 30.

In Kentucky, doctors, nurses, and other frontline health care workers at regional hospitals and residents and workers in nursing homes and assisted living facilities were the first priorities to receive the first vaccine released, by Pfizer, in December. That was soon followed by health departments receiving the Moderna vaccine to inoculate public health employees, first responders such as firefighters, police and paramedics, then school employees and finally, members of the general population who are 70 or older.

But when hospitals vaccinated health care workers, many also offered the vaccinations to donors and trustees.

Clark Regional Medical Center in Winchester was one that administer the drug to its leaders.

In a statement Clark Regional and its parent company, LifePoint Health Kentucky, attributed to CEO Matt Smith, the hospital defended its decision.

“We have closely followed the state of Kentucky’s guidance to administer COVID-19 vaccines to healthcare personnel within phase 1A. We did offer vaccination to our board members during this phase of administration given their important role in directly supporting our clinical quality and patient safety efforts. However, we only did so after ensuring that all of our frontline providers and clinical teams were the first to have an opportunity — and continue to be the priority — to receive the vaccine,” the statement said.

The statement said that vaccinating the board members is important to ensuring patient safety.

“Our board members play a critical role in these efforts by participating in monthly executive patient safety rounds. While they have been on hold during the pandemic, these rounds typically occur in all departments and involve regular interaction with clinical staff members in patient care settings. We are eager to resume this practice as soon as vaccination ensures that it can be done safely for board members, clinical leaders and patients. Our highly engaged board has also provided significant on-site support throughout each phase of our emergency response. Due to their potential for exposure in these settings, all of our board members were offered vaccination along with our other healthcare personnel,” the statement said.

Kentucky Public Health Commissioner Dr. Stephen Stack said in a press release Feb. 4 that Kentucky has vaccinated about 10 percent of its population since the vaccines became available around Christmas.

At the same time Gov. Andy Beshear announced the opening of four regional vaccination centers, including Kroger Field at the University of Kentucky, Stack said that in the next three weeks, each health department will receive a vaccine allocation equal to 1 percent of the population of the county they serve rounded to the nearest 100 with a minimum allocation of 100 doses per county.

“The quantities are insufficient. The vaccine quantities, overall, are not enough for the task, but this is still incremental progress,” he said.

Doses will be provided on Feb. 8, Feb. 15 and Feb. 22, and second doses will arrive four weeks later. Ninety percent of doses must be administered within the week. Doses should be used to vaccinate the 70-plus age group.

Stack also mentioned that the federal government would ship 1 million doses of vaccine to Walgreens and independent pharmacies, including 13,000 to pharmacies in Kentucky, averaging about 100 doses per pharmacy. Those, too, should be prioritized for persons 70 and older, he said.