Cal, Cats not ready to give up despite many frustrations 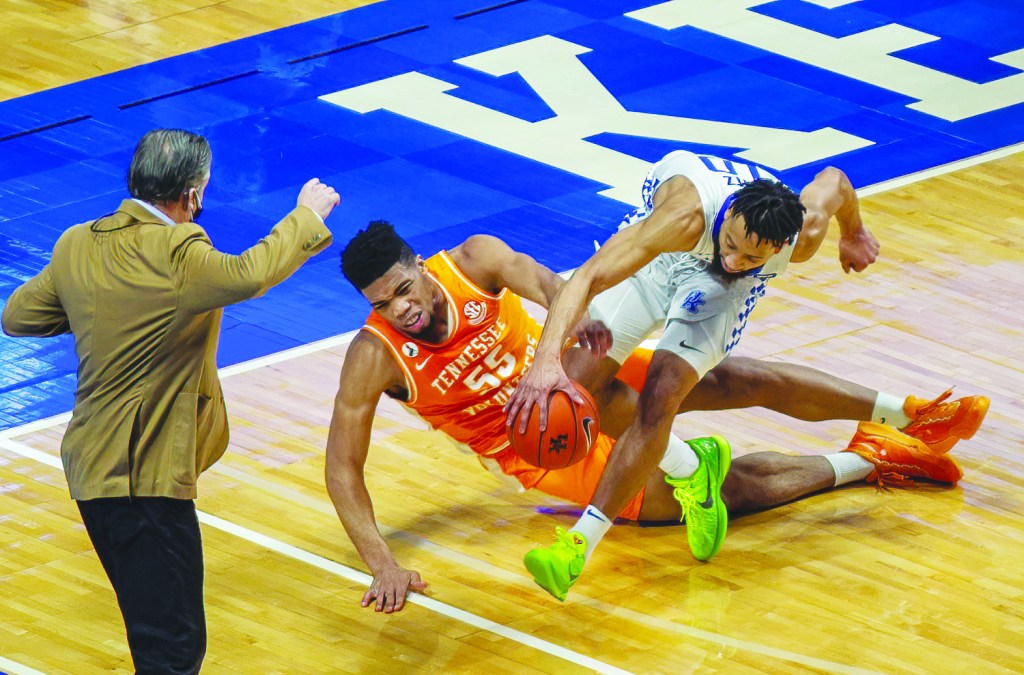 Coach John Calipari and Kentucky aren't throwing in the towel despite a 5-12 record with only eight games remaining. Davion Mintz hustles for a loose ball against Tennessee with Cal urging him on. Photo by Tammie Brown/Kentucky Today

It would be easy to think John Calipari has written off this season and is already looking ahead to next year.

That’s what some coaches typically do when the bottom falls out, and there’s little time for long-term repair this late into the season. Even short-term attempts to patch up the holes often fail. In addition to the head coach, the fan base also has a tendency to look ahead and instead of focusing on the here and now.

Following his team’s 82-71 loss to No. 11 Tennessee Saturday night, Calipari insisted he’s not interested in thinking about his next year’s one-and-done freshman class or even getting his current roster in position for the NBA Draft. He’s worried about navigating through one of the worst seasons in Kentucky basketball history, and time is getting short to consider even a possible break-even season to make up for the team’s current 5-12 record.

Calipari is not even thinking about the Southeastern Conference Tournament, which is usually an after-thought because his focus, by this time of the year, is getting his team primed and ready to make a run in the NCAA Tournament instead of racking up another league tournament championship.

In reality, unless Kentucky can somehow win its last eight regular-season games, winning the SEC Tournament may be the Wildcats’ only hope of even crashing the Big Dance. Calipari is aware that winning the league title could save the season, but right now, it’s all about the Arkansas Razorbacks, the next opponent on Tuesday night in Rupp Arena.

Looking for a glimmer of hope, Calipari has witnessed his team’s potential both behind the scenes and in the spotlight. In their last outing, the Wildcats led the Volunteers 54-48 with 12 minutes remaining before a late collapse sent Kentucky to its third straight loss for the third time this season.

“Look, we’re not that far off,” he said. “We just played three ranked teams, and we had a chance to beat them all. And we break down at critical times. Do I have the wrong guys in? I made some changes, and the guys that went in didn’t make any shots, turned it over. I mean, we’re trying everything we can, but I’m not thinking about next year. I owe it to these kids and this program to do whatever I can to get this thing flipped around, and that’s all I’m doing.”

Keion Brooks, the lone holdover who played significant minutes last season, said the late-game collapses aren’t because the Wildcats haven’t given up when it matters the most, and the team is still practicing hard.

“I’m here to go out there and give it everything I’ve got,” Brooks. “My teammates as well, every day we still come and work hard and practice hard. We listen to our coaching staff. We do everything we can to try and win these ballgames, and, quite frankly, it’s just not happening for us. But, it’s not due to a lack of effort or a lack of trying.”

Losing isn’t something the fan base or even Calipari is accustomed to happening. It was just six years ago the Wildcats were turning heads on their way to a perfect regular-season (31-0) and a close perfect finish (38-1) that ended with a loss to Wisconsin in the Final Four.

“It’s been 35 years since I’ve had to deal with something like this,” Calipari said. “But this team can paint the picture that they want. But not if you continue to have the same things happen, and we work on it, we show it on tape—see, part of it being, if guys aren’t playing well, this is the immaturity — if you’re not playing well, it’s hard for you to help us versus an Anthony Davis.”

Brooks added the losses are providing a learning lesson, not only for now but later.

“We’ve lost so much, we have the same conversations over and over again; and are still not winning games like we should be,” he said. “There is some value for our team, it gives us an experience to not ever feel this way again. Future teammates, future teams know that you have to do everything you can to not have that happen again.

Unfortunately, it’s a feeling that’s become all too familiar for this year’s squad.