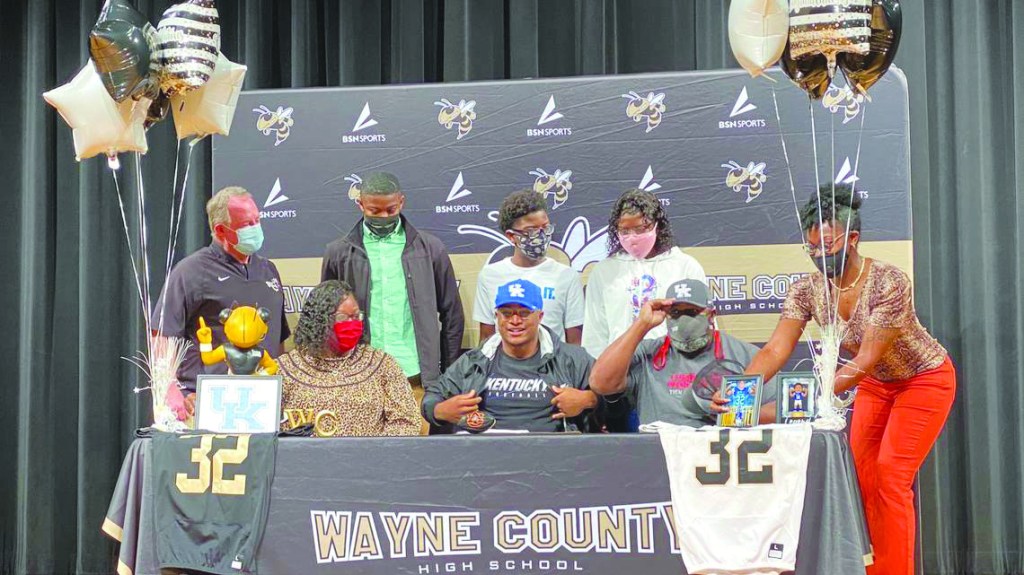 Georgia linebacker Trevin Wallace got some advice from former UK linebacker Jamin Davis that helped him decide to sign with the Wildcats last week.

The four-star prospect from Jesup (Ga.) Wayne County is rated as the No. 2 inside linebacker nationally by 247Sports and picked UK over Auburn, Florida State, South Carolina and Ole Miss. He is only the seventh top 100 recruit to sign with UK since 2014 and second in the 2021 recruiting class along with Frederick Douglass offensive lineman Jager Burton.

Lyndsey Gough is the sports director for WTOC-TV in Savannah, Ga. She is a 2015 University of Kentucky graduate and worked for WBKO-TV in Bowling Green for one year and spent two years with Spectrum News Kentucky for two years where she covered both UK and Louisville sports. Gough was at Wallace’s decision-making ceremony last week when he picked the Wildcats and liked how he handled it.

“He picked up an Ole Miss ball, then put it down. He picked up a UK ball and put it down and my UK heart sank,” she said. “Then he unzipped his jacket and said Kentucky, so that made me smile. I was even wearing my (UK) class ring and told him welcome to BBN. You could also tell people there were really  happy for him.”

No one was happier than Stoops and his coaching staff because they hope Wallace can provide immediate help to a position where UK needs playmakers. Leading tackler Jamin Davis opted to leave for the NFL but also had a role in Wallace becoming a Wildcat.

Because of the pandemic, Wallace’s recruitment has been Zoom calls with UK coaches or phone calls. Wallace has never been to Lexington.

“His decision to pick UK was fully based on his relationship with the coaches,” Gough said. “It wasn’t because he visited and loved the new facilities. It also helped that he talked to Jamin Davis who is from just one county over.

“Trevin called him a couple of weeks ago and he (Davis) told him he would  succeed anywhere he would go because of his talent but he could do something really special at Kentucky and that helped solidify his decision.”