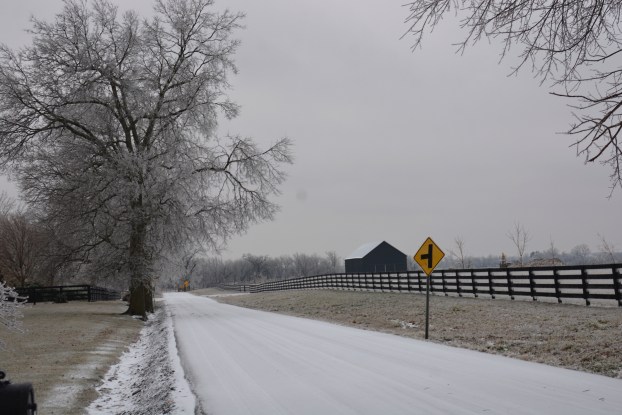 Colby Road, normally a busy corridor between Winchester and Lexington on weekday mornings, was eerily deserted after the ice storm Thursday. (Photos by Randy Patrick)

Few wrecks, but trees, lines down in county

Emergency Management Director Steve Asbury, who is also chief of the Clark County Fire Department, said Thursday morning most people seemed to be heeding advice to stay home, so there weren’t many accidents.

“We’re blessed with that,” he said.”“We do have some down power power lines,” mostly caused by falling or sagging tree limbs heavy with ice, he said. There were also some trees and branches down in roads.

He said firefighters were responding to emergency calls Thursday morning and had called in additional personnel.

“We’re still able to respond. It will just be a slower response,” he said.

The director advised that people stay home Thursday unless it was necessary to go out for an emergency, and if they do drive, “go slow.”

Students to return to school Feb. 16

Most Clark County Public Schools students haven’t seen the inside of their classrooms since March 2020 except for a few... read more