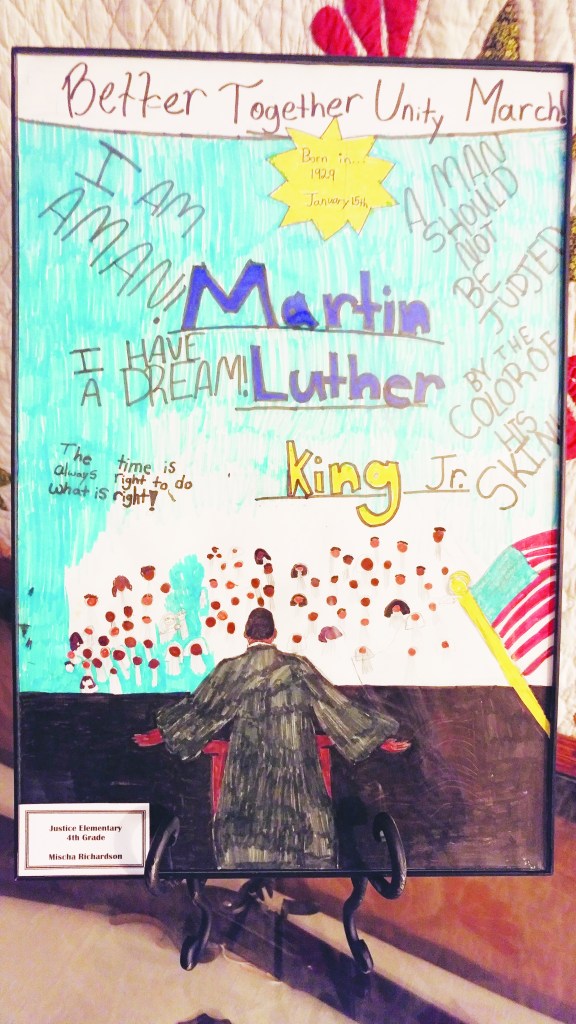 The Winchester-Clark County Unity Committee and the Bluegrass Heritage Museum are offering a two-week event honoring the life and legacy of Dr. Martin Luther King, Jr., at the museum Feb. 8-19.

Exhibits throughout the building highlight achievements of African-Americans and their impact in the community.

On the first floor, a quilt featuring children’s artwork was created in 2016 to commemorate 30 years of MLK celebrations. A hallway display honors the life and career of long-time teacher Evelyn Samuels. The Oliver Street School is remembered through photos and other memorabilia, including a copy of the 1955 “Oliver Torch” yearbook.

Also on this floor, an exhibit recalls how the first black Little League baseball program was established. White children were welcomed to play in 1954, leading to what was believed to be the first integrated organized sport in Kentucky, happening even before schools integrated.

In the second floor Military History Room, visitors can learn about Thomas Miller, who served with the Tuskegee Airmen during World War II and returned home to Winchester to become a successful businessman. Portraits of his wife Ann’s parents, James and Maggie Taylor, grace the end of the hallway.

Pulpit chairs from the First Baptist Church on Highland sit near a banner of the Union Benevolent Society from 1883. This organization had its roots in pre-Civil War time and served to care for the sick, support widows and orphans, and bury the dead.

The contributions of African-American soldiers during the Civil War are remembered in the person of Peter Bruner. He was born a slave in Clark County, escaped to join the Union army at Camp Nelson, and survived to live a long life and write an autobiography of his experiences.

Beneath the Bruner display, a table holds scrapbooks honoring Dr. King which were created by local elementary students. Other student artwork is displayed throughout the museum.

The museum is open Monday through Friday from noon until 4 p.m.

Rosemary Campbell is a volunteer at the Bluegrass Heritage Museum.