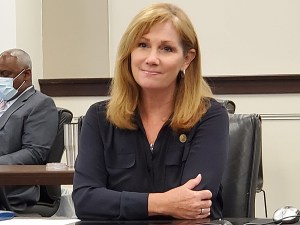 “The only way to adequately address the needs of people reentering society from incarceration is by understanding the structural barriers they face to accessing assistance,” said Rep. Kim Moser of House Bill 53.

Legislation aimed to address the needs of people leaving prison is advancing in the General Assembly.

House Bill 53, sponsored by Rep. Kim Moser, R-Taylor Mill, creates a Technical Advisory Committee on Persons Returning to Society from Incarceration. This panel would act in an advisory capacity to the Advisory Council for Medical Assistance.

“The only way to adequately address the needs of people reentering society from incarceration is by understanding the structural barriers they face to accessing assistance,” Moser said. “We want these individuals to be contributing community members and to transition in a manner that sets them up for long-term success. Many times, people involved in the criminal justice system deal with underlying mental health problems and substance use issues. It’s critical that we bring stakeholders and experts in to address barriers to individuals returning from incarceration.”

In addition to creating the Technical Advisory Committee, Moser’s bill adds two new representatives to the Advisory Council for Medical Assistance, from the Kentucky Primary Care Association and the Kentucky Association of Hospice and Palliative Care. Additional members will also be named to the TAC on Consumer Rights and Client Needs, and the TAC on Behavioral Health.

The measure passed the House 91-0 on Thursday, and now heads to the Senate.

Meanwhile, a juvenile justice bill was approved in the Senate on Thursday.

Senate Bill 36, sponsored by Sen. Whitney Westerfield, R-Crofton, would end the practice of automatically transferring some serious felonies allegedly committed by those under the age of 18 from juvenile court to circuit court.

Instead, the juvenile court judge would have to consult with both the county and commonwealth’s attorneys before agreeing to transfer the case to circuit court, where he or she could then be tried as an adult.

The bill also allows whether a gun was used in the commission of a crime to be added to the so-called “aggravators” that allows a juvenile to have their case sent to circuit court as a youthful offender.

It was approved 26-3, sending it to the House for their consideration.