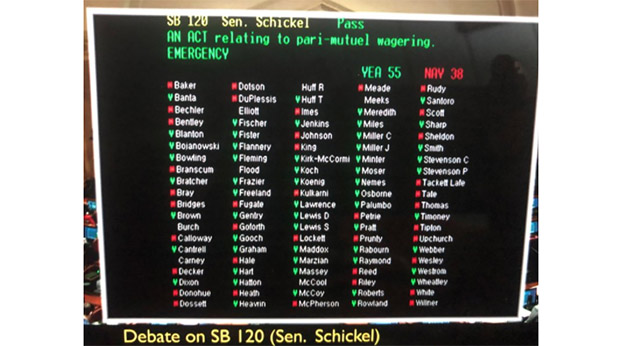 After months of uncertainty following an opinion by the Kentucky Supreme Court, historical horse racing in the state has gained legislative approval to continue operation.

Following nearly four hours of impassioned debate between legislators on both sides of the issue, the Kentucky House passed SB 120 by a vote of 55-38.

The bill will now be delivered to Governor Andy Beshear, who has signaled his intention to sign the horse racing industry’s top legislative priority.

The long debate was filled with emotional twists and turns, reported Tom Latek of Kentucky Today, with supporters saying the horse industry is part of Kentucky’s roots and lauding its economic impact and job creation while opponents fought back saying it would bring nothing but heartbreak and broken promises from a greedy industry.

Upon the bill’s passage, Marty Maline, Executive Director of the Kentucky Horsemen’s Benevolent and Protective Association praised the hard work of Kentucky Legislators.

“Horsemen across Kentucky, and those across the nation who race in the Commonwealth, should be so proud of the Republican and Democratic leadership in the Kentucky House for shepherding passage of SB 120.”

In particular, Maline expressed appreciation for the primary sponsor of the legislation, Sen. John Schickel of Boone County, whose district includes Turfway Park and Rep. Adam Koenig of Kenton County, who chairs the House Licensing and Occupation Committee and who managed SB 120 during House consideration.

He said, “As Rep. Adam Koenig and others so eloquently expressed, Sen. John Schickel’s bill is imperative to securing the future for a signature Kentucky industry and the tens of thousands of jobs and billions of dollars it preserves and creates in economic development, agribusiness and tourism for our state.”

Now that SB 120 will become law, planned facilities investments in excess of $600 million will resume in locations around the state, including at Turfway Park.

With the protection of the revenue stream from historical horse racing Kentucky racing purses, breeders’ incentive funds and the overall racing circuit will continue the improvement that has allowed it to gain significant ground against competing racing states and surrounding states with other forms of gaming.

“With this clarification of what constitutes parimutuel wagering and resulting protection for Historical Horse Racing, Kentucky racing can continue its upward trajectory as America’s premier racing circuit – and thanks to SB 120 we will have a strong year-round circuit,” Maline added.

“Passage of this bill not only protects the livelihoods of countless Kentuckians, but also avoids what would be a devastating loss in business to the thousands of small business owners and vendors who directly and indirectly benefit from the horse and racing industries.”

“On behalf of our team members, our horsemen and all the citizens of the Commonwealth who earn their paychecks directly or indirectly from the horse industry, we applaud the Kentucky House of Representatives for the passage of SB 120. The future of the Commonwealth’s signature industry and those who support it is secure.”