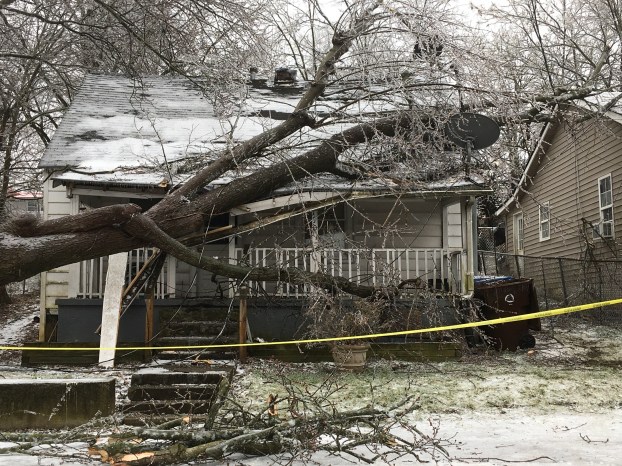 Freezing rain that left tree branches coated with a heavy layer of ice last Wednesday and Thursday resulted in thousands of residents and businesses in Clark and neighboring counties losing electrical service.

Nick Comer, a spokesman for Touchstone Energy cooperatives, said that around noon Thursday, about 10,000 Clark Energy customers in several Central and Eastern Kentucky counties were still without power.

“It’s pretty widespread,” Comer said, mentioning outages in Clark, Montgomery and Madison counties, although it seemed that Clark County got the brunt of it.

By Saturday afternoon, the rural electric co-op had reduced that number by about half, to a little more than 5,000, including close to 800 in Clark County.

Help came from other cooperatives, including some from out of state. By Thursday night, Comer said, Clark Energy expected to have at least 100 workers on the ground repairing lines and restoring energy in Clark and 10 other counties.

Comer said the priority areas would be those with the most customers, and then they would work on places that had only a few.

“That’s going to take some time,” he said. “When you’re without power for a few days, it’s frustrating, I know.”

But crews were working as hard and responding as quickly as they could, under difficult circumstances, he said.

Comer said that until there is a thaw, the heavy icing is going to continue to drop trees and branches on power lines, causing more outages.

Temperatures were expected to remain in the teens and 20s until Thursday, and there was more snow expected Monday, which could bring down trees that are already stresse

According to Clark Energy’s outage map, about 2:20 p.m. Saturuday, there were 5,128 still without power in Bath, Bourbon, Clark, Estill, Fayette, Madison, Menifee, Montgomery, Morgan, Powell and Rowan counties. Seven hundred eighteen of those were in Clark, and 1,077 were in Montgomery County.

The outage map for Kentucky Utilities, which also serves Winchester and part of the county, showed on its outage map more 100-120 customers in Clark County without power on Thursday but none by Saturday afternoon.

On Thursday, Gov. Andy Beshear declared a state of emergency because of the ice storm, which directs the Kentucky Division of Emergency Management and the Department of Military Affairs to execute an emergency operations plan and coordinate the response across state agencies and private relief groups.

As of 10 a.m. Thursday, Kentucky Emergency Management was aware of about 70,500 Kentucky customers with power outages across the state.

Clark County Emergency Management Director Steve Asbury said Thursday morning there had been few calls about vehicle accidents overnight because most people had heeded advice to stay off the roads.

There were some power lines down across roads, and the eastbound Interstate 64 rest area near Winchester was closed because a tree had pulled down a power line.

Firefighter Trevor Holliday said late Saturday afternoon that there still hadn’t been many accidents, and there had been no structure fires caused by down power lines.

Clark County Judge-Executive Chris Pace said Friday that most of the roads in the county were passable.

He said Clark County and Winchester executives had together declared a state of emergency along with the governor’s declaration.

“Powers enumerated under KRS 39A 100 give broad discretion to the local executive officer to make procurement decisions that would otherwise require delay for fiscal court approval,” Pace said.