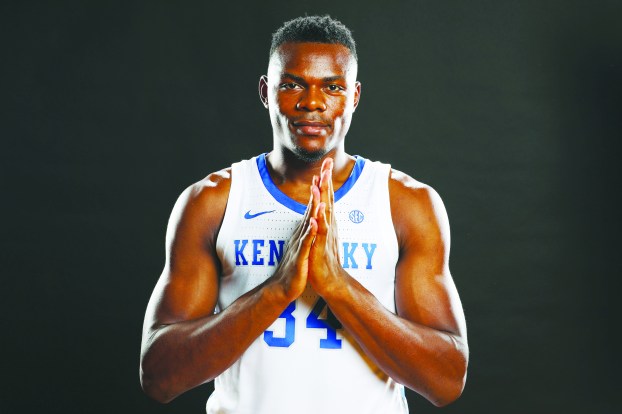 Oscar Tshiebwe’s size and physicality make John Calipari wish he could play for Kentucky now instead of next season. - UK Athletics Photo/Elliott Hess

West Virginia transfer Oscar Tshiebwe was scheduled to start practice with coach John Calipari’s team this week. Calipari’s only regret — he is not eligible to play and add his physical presence to the team now.

“When I see him and his body and his toughness and his -– I’m like, ‘Is there any way? Is that transfer rule immediately? Can we do that now? Can he come and play now?’” Calipari said.

“But he’ll start practicing and we’ll get a chance to see where he is. It’ll be good for these kids to have to go against him every day just because of physicality and athleticism and quickness to the ball and all of that stuff.”

Kentucky native Anna Maria Tarullo is sports director at WOWK 13 News in Charleston, W.V. and said UK is “already stacking up wins for next year” with Tshiebwe on the roster.

“He’s a front-court presence who can play facing the basket. He will draw defenses in on him and create shots and rhythm for other players. He’s got a bigger build and is more physical than players Cal has had,” she said. “He goes back to a guy like Karl-Anthony Towns with his size and strength.

“And if you are not making 3-point shots, he’s going to rebound. He’s going to be tremendous and playing for Cal should be great for him.”

BY LARRY VAUGHT Vaught’s Views Vince Marrow spends a lot of time recruiting for the Kentucky football team but if... read more