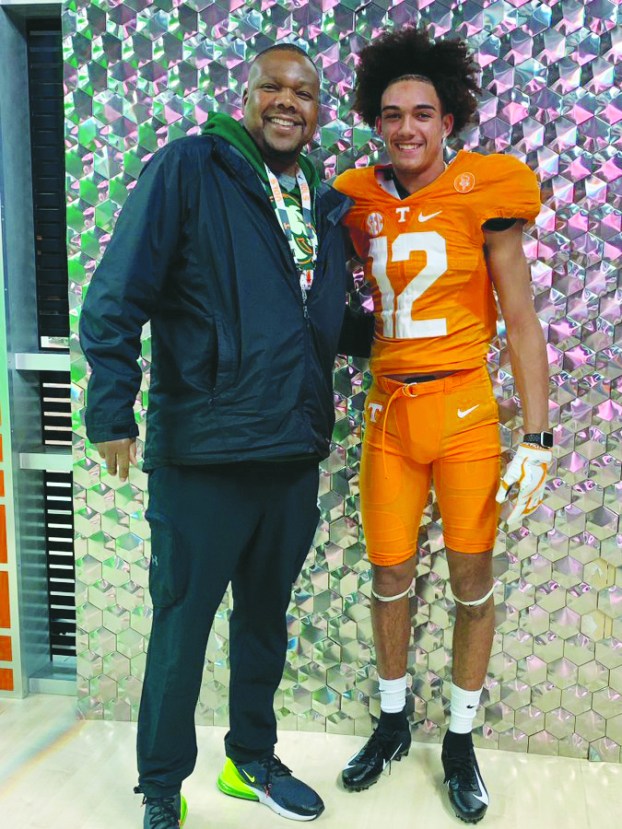 Former Kentucky linebacker Donte Key won’t deny that he had a “little situation” with the UK football staff over not recruiting his oldest son, Devon.

Donte Key once told me Devon “grew up on Kentucky’s football field” but was not offered a chance to play for the Wildcats. Instead, he went to Western Kentucky and broke the FBS record for career tackles with 350, including 15 in a game against Liberty last season. He’s now preparing for the NFL draft.

Frederick Douglass junior Dane Key is one of the state’s top players in the 2022 recruiting class. He had 37 receptions for 625 yards and 11 scores in only nine games last season. The four-star recruit recently got an offer from Wisconsin to go with ones he already had from UK, Texas, West Virginia, Oregon, Arkansas, Louisville, Cincinnati, Georgia State, Kansas, Purdue, Maryland, Marshall, Tennessee, Vanderbilt, Virginia, Virginia Tech and Western Kentucky. Notre Dame and Ohio State have not offered the 6-2, 175-pound Key but have shown a lot of interest.

“When Vince (Marrow) and Mark (Stoops) started recruiting Dane, they brought me over and we sat down and talked like men,” Donte Key said. “I was still pretty upset about my older son’s situation. We had a good conversation. I was impressed with what they said and it made me feel more comfortable with them recruiting him. I respect what they have done and the type of players they are getting.”

There has been speculation that Donte Key would not want Dane to play at UK because Devon did not get that chance.

“I would not tell Dane where to go or not go based on anything with me,” Donte Key, who set up the winning score with a fumble recovery and also intercepted a pass in 1994 against Louisville to earn game MVP honors, said. “I am in contact with Vince a lot. I can see why Vince is such a great recruiter. He’s hard to tell no.

“Dane already has a lot of good options. We need to see where his best fit is. He’s going to take his time making his decision. Kentucky is where his dad played and will always be in the conversation. When a kid has the potential to play where his dad played, that is really special.”

But … Dane Key also wants to catch the football in college like he’s done at Frederick Douglass. He caught 33 passes for 545 yards and eight touchdowns as a sophomore.

Kentucky has not had a wide open offense in recent years. The Cats have won but not with an offense that features big play receivers. That’s one reason Wan’Dale Robinson originally signed with Nebraska but now has transferred to UK. Stoops fired offensive coordinator Eddie Gran and has brought in former NFL assistant coach Liam Coen to run more of a pro-style offense that could suit Key — and other receivers — a lot more. Coen reached out to Key not long after getting the UK job.

“Kentucky is on the list Dane is going to consider pretty heavy but there are other schools interesting to Dane and us. It’s just hard to get a grasp on that right now because you can’t make campus visits,” Donte Key said.

“Vince stays in really good contact with Dane just like he did with Dekel,” Donte Key said. “He told him you are going to see some different things with the offense and you are going to like it.

“During the season I don’t think he was considering Kentucky. But they are definitely in there now with Dane,” Donte Key said. “He is close to Jager and Dekel but that won’t determine his decision. His decision will be where is the best fit to exploit his skills. If that’s Kentucky, fine. But it might be Oregon, Texas, Arkansas, Louisville or other places. There’s no limit on his choices at this point.”

BY LARRY VAUGHT Vaught’s Views Any time he gets a chance to watch the University of Kentucky play basketball, Scott... read more