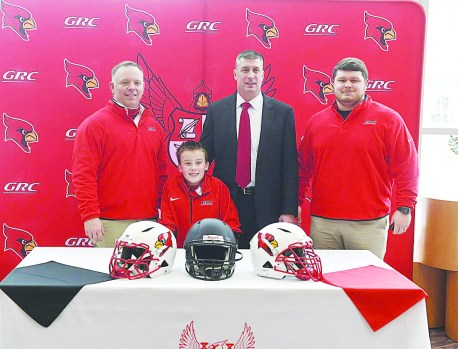 Coach Joe Chirico has begun building his coaching staff, starting with Matt Chandler, left, and Jordan Ray, who both are coming from Paintsville. Brayden Chirico, front, is the real star. - Smoke Signals Photo 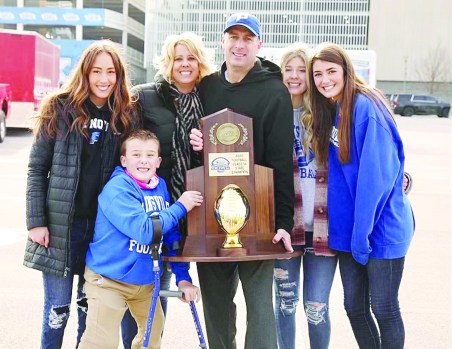 Joe Chirico poses with his family after his Paintsville team won the Class 1A state championship in December. Pictured are Chirico’s wife, Ashley, of 26 years, with their children Sydney, Isabella, Presley, and Brayden. - Photo submitted

A passerby could have easily mistaken the rousing oratory in GRC’s media center last week for an inspirational speech.

“When you think you can’t go further, by gosh you can go further. Keep going and don’t quit.”

“Treat people the way you want to be treated and help others succeed.”

And Cardinal Nation is listening.

Joe Chirico, GRC’s new head football coach, speaking to the hiring committee last week, played down his success on the field. Instead, he talked far more about his team-oriented philosophy, his passion for teaching life lessons, and his love for his players.

“GRC is a program that I have always been fascinated with,” Coach Chirico said. “The administration is committed to winning. That is evident when you look at the new school and all the facilities on our campus. I’m excited about the opportunity to be a small part of the football history here at GRC.”

The energetic West Virginia native who led Paintsville to its first-ever state championship this past December takes the reins immediately.

“I’m both feet in; I’m not sticking my toe in the water,” said Chirico, 50. “I come here to be part of a family and that’s how I approach this.”

Chirico’s coaching mastery is no joke. He turned the Paintsville program around in a single year eight seasons ago and experienced one of his proudest moments last December on Kroger field.

“Outside of the days my children were born,” Chirico says, “one of my proudest achievements is holding the state championship trophy with my son on Kroger Field.”

Chirico and wife Ashley’s youngest son, Brayden, is his dad’s No. 1 fan and minces no words when asked what GRC can expect with his dad as football coach.

“He’s just a good guy and he’s smart in football,” says Brayden. “He knows what’s going on and he’s just an all-around great guy and I think the players will love him.”

With the weather hampering his ability to meet his new team, Coach Chirico is finally GRC official and impatiently awaits the day spring practice can begin.

“I’m ready to get started,” he said. “My first goal is to start build a relationship with my players and establish the expectations of a GRC football player.”

Chirico clearly had no trouble doing that at Paintsville, which had experienced seven straight non-winning seasons before his arrival in 2013.

After a 3-8 campaign in 2012, the Tigers went 8-4 and won a playoff game in Chirico’s first season. They then proceeded to win 11 or more games every season after that on their way to the school’s first state title a few months ago.

Chirico’s record in eight seasons at Paintsville was 86-20 with a state runner-up trophy to go along with the 2020 Class A state championship.

“We did something in Paintsville that no one had done in 100 years,” he said. “I’ll say it until they throw dirt on me: I’ve had more talented teams than the 2020 team, but I have never coached a TEAM that was like this. Every kid loved each other. Every kid was willing to help each other out. When we can find that here, the sky’s the limit. That’s the only way I know to look at it. I embrace the challenge.”

A two-sport high school athlete and a star defensive secondary player with Marshall University in the early 90s, Chirico is no stranger to championships. He was part of the Herd’s 1992 Division I-AA national championship team and played in two other national title games.

Coming from 1A school with a 7-12 enrollment of about 350, to 6A GRC with an enrollment of 1,600 may seem to be a huge transition, but for Joe Chirico, having more young men to coach and develop is all the better.

“The challenge of 6A has always been intriguing to me,” Chirico said. “I’m going to learn some things and it’s going to take me a minute but I’m a fast learner and I’m willing to ask questions. I’m man enough to say I’m going to make mistakes, but I’ll make them at 100 miles an hour.”

Off the field, Chirico has spent 26 years in the promotional printing industry, most recently with Consolidated Graphic Communication. He plans to expand his customer base in Central Kentucky after moving his family to the area.

Throw away the playbooks and highlight video.

Chirico’s message to his GRC players is simple. “They should know that I believe life is best when you put God first, then family, and next would be whatever is in your dreams. Also, I believe in helping other people achieve their dream and success.”

Coach Chirico’s down-to-earth style and genuine personality are so endearing that you feel as if you’ve known him for years after one conversation.

Indeed, it’s safe to say a Joe Talk is good for the soul.

Look him up and he’ll be happy to oblige.

“I like to talk, and I’ll talk to anyone,” he says, “but the only way I can speak is from the heart. If I say it, that’s what I mean and I’m here to tell you, this is going to be fun. This is going to be really fun.”