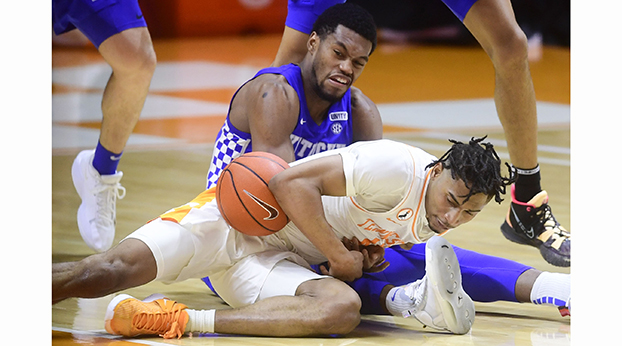 Kentucky stayed nearly a week in Tennessee and ended the six-day road trip with an impressive 70-55 win over Tennessee on Saturday.

Kentucky departed for the two-game trek last Sunday ahead of a winter storm and began the trip with an 82-78 win at Vanderbilt last Wednesday. The Wildcats continued the impressive showing against the Volunteers, shutting down Tennessee on the offensive end of the court after the Vols defeated South Carolina 93-73 earlier this week.

The Wildcats (8-13, 7-7 Southeastern Conference), notched their third consecutive win going into the final two weeks of the regular season. Kentucky blew a 10-point lead in an 82-71 loss to Volunteers on Feb. 6 in Lexington, but this time, the Cats built a double-digit lead in the first half and never surrendered despite scoring just 25 points in the second half.

“We did some good stuff,” Kentucky coach John Calipari said afterward. “They weren’t at their best. I know they’re better than they played. But let me just tell you, we were at our best … I believe in this team. I still do.

I don’t care about the record. I don’t even know what the record is. All I want to know is that we’re getting better. … It was a good effort.”

Calipari said the Wildcats learned how to defend against the Volunteers and shut down Tennessee guards Jaden Springer and Keon Johnson, who combined for 50 points in the earlier-season meeting between the two border rivals. In the rematch, Springer and Johnson managed just 19 combined points.

Taking a lesson from the last contest against the Vols earlier this month, Calipari said the Wildcats simply tried to “crowd the court a little bit” and added his squad “played team defense.”

“We learned a little bit from the last time how you have to play them and then we knew coming in it was going to be hand-to-hand combat,” the Kentucky coach said. “We didn’t back away. … We were really guarding and we really rebounded.”

“It was a point of emphasis and having your teammates’ back and not leaving anybody on the island,” he said.

“We had a much better game plan of stopping their penetration and helping each other (on defense).”

Davion Mintz helped the Wildcats build a double-digit lead but knocking down all five of his three-point attempts in the first half. Behind Mintz, who scored all of his 15 points in the opening half, Kentucky used an 18-3 run to wear down the Vols early and built a lead that blossomed to 21 points in the second half. Mintz knocked down two 3-pointers during the decisive run that began with 15 unanswered points by the Wildcats.

Sparked by the impressive shooting by Mintz, four Kentucky players finished in double figures, paced by Isaiah Jackson, who poured in 16 points and grabbed seven rebounds. Keion Brooks followed with 10 points and completed a double-double with 14 rebounds. Olivier Sarr chipped in with 10 points and seven boards.

Calipari was elated to see the scoring balance but was equally happy with his team’s ability to make hustle plays against the scrappy Volunteers.

“When you’re playing in this kind of game in hand-to-hand combat, you’re just fighting for your life,” Calipari said. “If the ball is there, grab it. … We’re going with guys that are playing well and that’s just how it is. We’re not living in China and it’s not communism. We’re running with a group of guys that are coming up with 50-50 balls and fighting like crazy.”

They didn’t back down against the Volunteers and it showed.