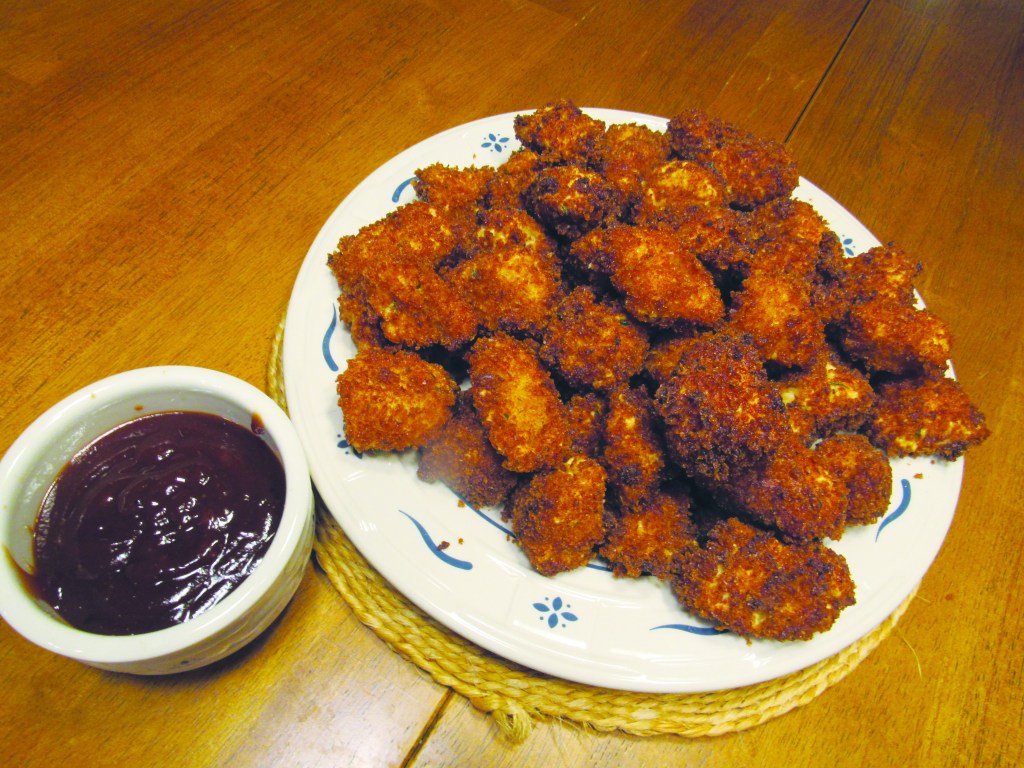 Nailed It or Failed It

In a small bowl, combine panko, seasoning mix, and salt; set aside.

Pour oil to a depth of 2-inches in a large Dutch oven.  Heat to 360 degrees.  Fry chicken nuggets, in batches, for 5 to 6 minutes, or until done.

I thawed chicken for supper not knowing how I was going to prepare it. I was looking for a way to fix it when I ran across this recipe for Ranch Chicken Nuggets, from the May/June 2007 issue of Cooking with Paula Deen. The recipe sounded perfect.

I cut the chicken into about 1-inch cubes and set them aside while I mixed the panko, ranch seasoning and salt into a large zipper bag. The flour was in a bowl and the beaten egg was in a different bowl. I was ready to start dipping the nuggets and get them into the hot oil.

I started out with a large Dutch oven. It’s rare that I fry anything because it usually makes a big mess in the kitchen, fried foods aren’t that good for you and frying isn’t my specialty.

I figured this could not be that hard. To make sure I got the oil hot enough I decided I’d clip a cooking thermometer to the side of the large pan then started pouring my oil in. Well I didn’t have that much vegetable oil so I started adding Crisco shortening to the pan. It was taking so much to get to two inches deep that I stopped and got out a smaller heavy-duty pan and switched.

I gently poured the heating oil mixture into the smaller pan and waited for the temperature to come up to 360 degrees. As the oil heated, I started dipping some floured pieces of chicken into the egg and then the panko mixture.

As soon as I had about 8 or 10 cubes ready, the oil had come to temperature. I gently put them into the hot oil and let them fry. After the first batch of nuggets were brown, I put them on a plate and placed them in the oven to keep warm because I had a lot of chicken to go. One pound of cubed chicken breast is a lot of chicken nuggets.

I dipped the next batch of nuggets into the egg and then panko and into the hot oil they went. Before I knew it, the oil temperature had risen to 400 degrees, I turned the burner down and hoped for the best. The temperature was not going down very fast so I removed the pan from the stove hoping it would cool down to 360 quickly. The second batch of nuggets kept cooking and cooked faster than the first and I found myself in a dilemma.

I thought it would be an easy process of breading just enough pieces of chicken while one batch cooked and then frying them, and while that batch cooked prepare another batch. This was a bad way to think. The pieces were frying so fast I could not keep up.

While I was waiting for the oil to cool down, I decided I’d go ahead and get all of the chicken nuggets breaded and ready to cook, then as I removed a batch, I’d just start another. This worked much better.

Once the oil cooled, I was able to get more nuggets into the pan and kept going. Still, the whole time I had trouble controlling the oil temperature.

It would go down to 340 then back up to 360 and even a little higher. Toward the end, when I had about three or four batches to go, I put some nuggets into the hot oil and it started boiling. Up and up the sides of the pan it went, I turned the temperature down and started stirring the nuggets and the oil subsided.

The next batch did the same thing, but I stirred the oil and nuggets and it didn’t boil up to the top of the pan. On the next to last batch the oil boiled up so much I panicked; thank goodness Brad was close by. He came into the kitchen as I turned the burner off but the oil was still boiling and about to roll over the top of the pan.

He got some hot pads and  he got the pan off the burner. Whew, I thought for sure we were going to have a grease fire. Even off the burner the nuggets kept cooking, quickly. The last batch went into the hot oil and I could not believe that they ended up totally cooking without being on a hot burner.

I told Brad maybe that’s why the recipe said to use a Dutch oven; it would have been much deeper and maybe using a lot of oil would be worth it.

Finally, my nerves calmed down and we were ready to sit down for supper. We had barbecue sauce and honey mustard for dipping and we dug in after Brad said a prayer.

Before we started eating, I told Brad I wasn’t sure if I wanted them to be good or not. I did hope they would be good because that was a lot of chicken I’d cooked; and we didn’t have anything else I could prepare for supper.

If they were good, I wasn’t sure I’d ever fix them again because the kitchen was a mess and well, it was a hassle doing all of that deep frying on the stove, not to mention terrifying there at the end.

While we were eating Brad said that as soon as he knew I was having trouble he almost grabbed the fire extinguisher because he was sure I was getting ready to set the house on fire. I’m so thankful I didn’t, but I had the same thought as the hot oil was about to bubble at the top of the pan. If I’d been by myself, I’m not sure what I would or could have done because I only have two hands and definitely needed more.

OK, so here’s the verdict. The nuggets were pretty good. Not out of this world great, but good. This recipe made of ton of nuggets. I f you are brave enough to deep fry, they would be great served as an appetizer at a get together.

Because there were so many, we had them again the next night, and they heated up well.

In the end, I nailed this recipe, but I’m not sure I’ll ever make them again, unless I get a stand-alone deep fryer with a basket. Otherwise I don’t think my nerves could stand it.