Senior Day: Walk-on Welch has savored his time with Wildcats 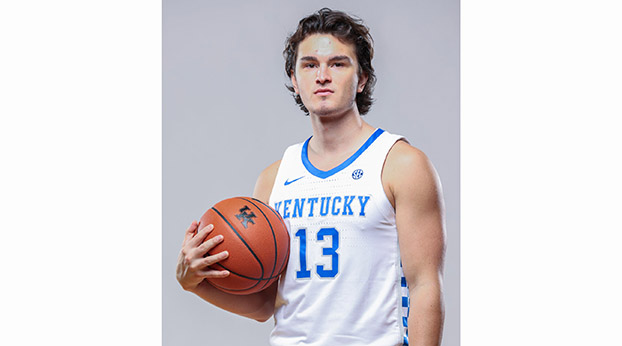 Riley Welch will be honored on Senior Day along with Davion Mintz and Olivier Sarr. (Photo by Elliott Hess | UK Athletics)

Riley Welch has spent the past two years rooting for his teammates. On Saturday, they will be cheering for the Kentucky guard on Senior Day.

Welch will be one of three players honored before tipoff against Florida, even though the Wildcats have a makeup game scheduled on March 6 against South Carolina that was announced earlier this week. Graduate senior Davion Mintz and senior transfer Olivier Sarr will join Welch in the pregame ceremonies.

Welch, whose father John Welch most recently served as an assistant coach with the Los Angeles Clippers and played collegiately at UNLV, has played in just five games with the Wildcats, and his lone appearance this season was in the season opener against Morehead State on Nov. 25.

For Welch, who has two steals to his credit, it’s been an “amazing” two years with the Wildcats. He added that games, especially prior to the pandemic, were always “fun and enjoyable,” both at home and on the road.

“Those (games) are always really fun, but personally just getting to build relationships with the coaching staff, my teammates that I’ve had through these two years (has been enjoyable),” he said. “Obviously, we’ve faced more adversity this year than last year. It’s just been a really special time in my life and I’m forever going to be grateful for it.”

Welch isn’t sure if he will be joining Mintz and Sarr in the starting lineup, but he plans on following his normal pre-game routine against the Gators.

“I just approach Senior Night like any other game,” he said. “I’m going to try and prepare the guys the best I can and get out there and try and get another win.”

Normally, Kentucky coach John Calipari doesn’t use his walk-ons as much as his top 10 players, but Welch has been more active this year, serving as a point guard on the second team in the absence of freshman Terrence Clarke. As with the top players, Calipari has pushed Welch harder this season.

“When I’m out there I can’t slow things down,” he said. “I’m expected to be up to speed with everyone else. He challenges me to try and make our guys better. I’m super fortunate to have the relationship that I do with coach Cal, how much trust he’s had in me throughout my time here.”

Much like his father, Welch plans to enter the coaching profession once his collegiate career comes to a close.

“That’s still the plan,” he said. “It’ll be huge for me starting my coaching career. Getting to see Coach Cal up close and in person every day and how he handles teams, how he handles individuals, how he deals with his staff, and then also I’ve been fortunate to play for an unbelievable set of coaching staffs in the two years that I’ve been here.”

Although his two seasons have been filled with ups and downs, Welch said the good times and the adversity will help him become a better coach in the future.

“No one ever wants to go through difficult times,” he said. “I mean, if you ask anyone, ‘Do you want to be happy or sad,’ everyone is going to say happy. During difficult times is where you learn about yourself and the people around you.

Although seniors have the option to return next year, Welch doesn’t plan on coming back as a player next season and is thankful for his two years on the team.

“I’m super grateful for everything he’s done for me, super grateful to the fans, the university, the state of Kentucky,” he said. “It’s been a dream experience these last two years. I love it here, so If I have the opportunity to and that was something Cal wanted, it would be hard to pass up. But if not, I’m ready for whatever lies ahead.”