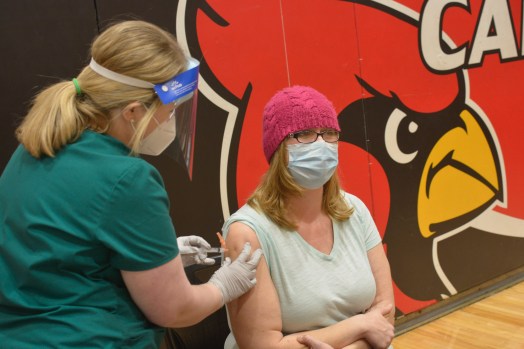 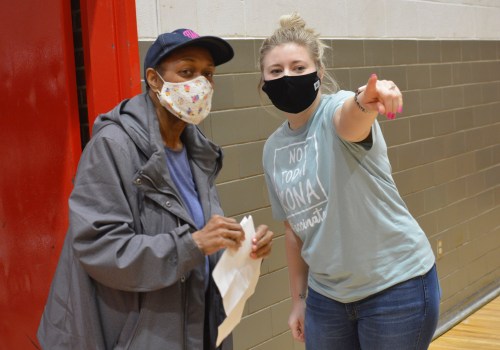 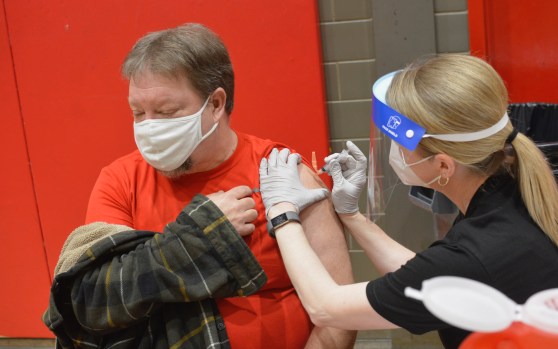 Greg Embs, a custodian at George Rogers Clark High School, had no qualms about getting his COVID shot Saturday. Administering the vaccine was Jennifer Gulley, RN, the Health Department's nursing director. 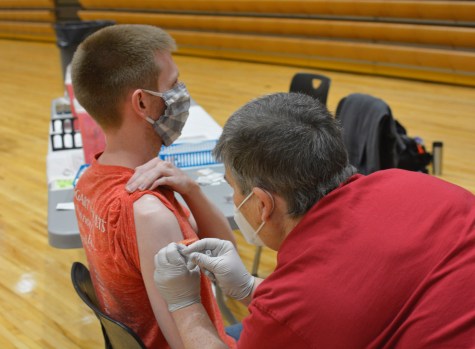 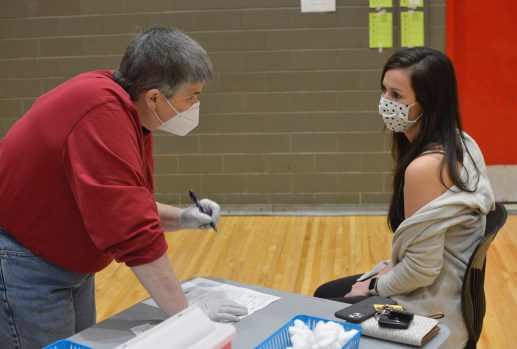 Teachers and other school employees got their second round of Moderna COVID-19 vaccinations Saturday.

Kristin Hall, a ninth-grade civics teacher at George Rogers Clark High School, said she felt more confident about going back into the classroom after having had both rounds of vaccine.

“I feel a lot more comfortable interacting with the students,” she said.

Hall said she looked forward to going from hybrid instruction to normal, in-person learning on March 15.

“It will be nice. Online doesn’t work as well as far as the relationships go,” she said.

Embs said he didn’t have any problems with his first shot and didn’t expect to have any with the second.

“I have two children myself, and I think they’re really excited to get back into in-person learning,” Neely said.

Rector said she felt safer about being with her students now that she’s gotten her first vaccination and the booster.

“Hopefully, this will make us feel safer in the classroom and make the kids feel safer and the whole community,” she said.

Public Health Director Becky Kissick said the Health Department had prepared to give vaccine for about 700 school employees in kindergarten through 12th grade. The patients had to schedule their appointments.

Because there were some cancellations, public health workers also had some vaccine available for those in the second group of the general public, which included adults 70 years old and older.

Health Department employees had help from firefighters who are also paramedics or EMTs and school health workers.

The Saturday clinic ran from 9 a.m. to 2 p.m. Sheila Doyle, an RN for the Health Department, who was busy filling vials, said that at 11:30, they had given almost half of all the doses.

The clinic had gone well, she said.

“People know what to expect,” she added.

Kissick said the Health Department would start giving the first round of shots for people in the 1C group soon. That group includes people age 60 and older, those 16 and older with serious health issues and other essential workers besides those who have already been vaccinated, such as teachers, police officers and nurses.

Vaccinations are by appointment only.

Kissick was hopeful that the approval last week by the Food and Drug Administration of the new Johnson & Johnson vaccine would help make more vaccinations available more quickly.

“We know that the Johnson & Johnson vaccine is going to open up a lot of doors for us,” she said.

The Johnson & Johnson vaccine, unlike the Moderna and Pfizer vaccines already in use, requires only one shot and can be stored in normal refrigeration, not in extremely cold freezer temperatures.