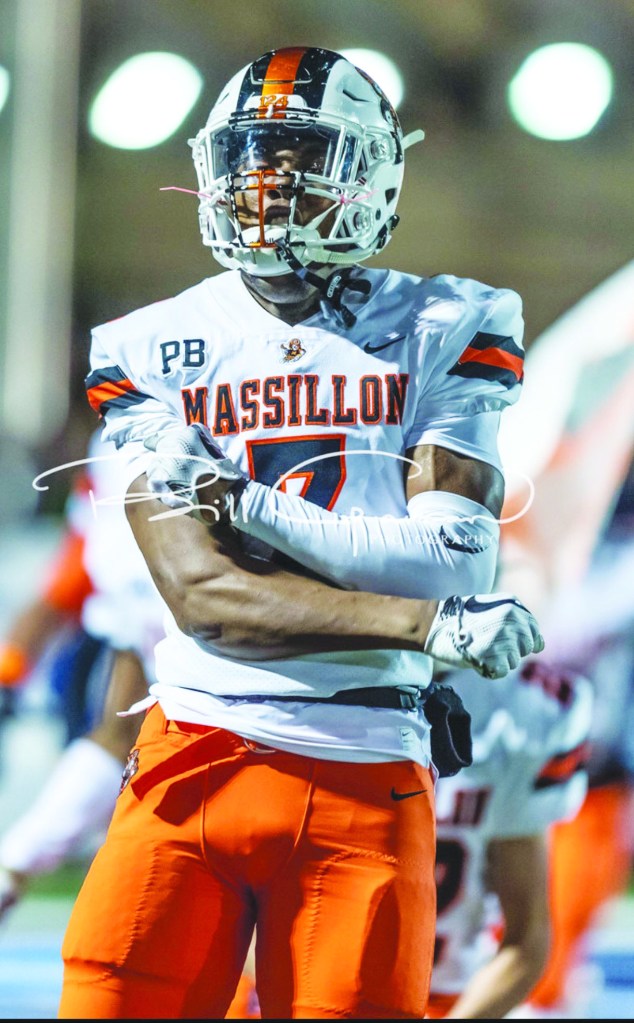 Tre'Von Morgan was the top-rated receiver in Ohio in the 2019 recruiting class and will be a big target for UK quarterbacks. (Massillon High School Photo)

Once he decided he was going to leave Michigan State, receiver Tre’Von Morgan had some schools reach out to him and he reached out to a few others, including Kentucky.

The 6-6, 215-pound Morgan was the No. 1 receiver in Ohio in the 2019 recruiting class and a four-star prospect who caught 37 passes for 691 yards and 12 touchdowns his senior season. He also had offers from Ole Miss, Iowa, Iowa State, Cincinnati, Missouri, Pittsburgh and others. He picked Michigan State and redshirted in 2019 and played only sparingly in 2020.

“My cousin, Brandon Jackson, had played at Kentucky and was always telling me how nice it was and how he enjoyed it,” said Morgan. “There really was not any interest from Kentucky when I was in high school other than maybe a few texts about me. But my (Michigan State) teammate (Luke Fulton) went there, I knew a lot of the coaching staff was from Youngstown and they had people I could connect with.”

One of those was recruiting coordinator Vince Marrow, so Morgan sent a text indicating he was interested in transferring to UK.

“I knew coach Marrow was a good dude and Kentucky was at a good spot in the SEC. I thought, ‘Why not?’ So I reached out to UK and some others,” Morgan said. “I definitely had really strong interest from some other schools. If there was not any interest, I would never have left Michigan State. But schools like Pittsburgh, Virginia, Northwestern, Ole Miss and a couple of others had interest.”

Morgan believes it was his versatility that UK liked more than anything else.

“I know I can play and I know they needed a big receiver. I knew they had some 6-2 and 6-1 guys. I am 6-6 and go up and can catch the ball,” Morgan said. “I can play inside or out, match up with a linebacker or whoever. I played inside in high school and outside in college. My role will be just to make plays downfield, inside, outside, block or whatever they tell me to do.”

Morgan said describing him as a “big dude who can go catch the ball” is accurate description.

He had to rehabilitate a knee injury suffered in preseason practice his first year at Michigan State. He said it was a cartilage injury, not a more serious torn tendon.

“It probably came from growing too much,” Morgan said. “It was nagging more than anything else. I am fine now, stronger than ever. Lifting is also all I can really do now so I should be even stronger when I get to Kentucky. I know I have to get tougher and get prepared for the SEC.”

He’s never been to Lexington or UK but feels like he knows plenty about what awaits him when he does arrive.

“I couldn’t tell Kentucky I didn’t want to come. I had no choice but to take that offer,” he said. “Hey, my guy Lynn Bowden came in (from Ohio) and went nuts there. I have been watching plenty of UK games looking at the environment there and other little things. It’s been great to see the growth in the program. I am ready to hop in and join that train ride upwards.”

He didn’t know Liam Coen was coming from the Los Angeles Rams to be UK’s new offensive coordinator when he first reached out to UK. He says the Rams had a “creative offense” he liked and is excited about playing for Coen even if players on campus will have a bit of a head start on him since he won’t be at UK until June.

Former UK all-SEC running back Anthony White says Morgan will be behind other players when he arrives on campus.

“I would rather he have a full year to learn the new offense and it will hurt him not getting mental reps this spring and his hands on the playbook will set him back some,” White said. “However, he’s also a big guy you can just put outside and let him go up and get the ball and he sure looks like he can do that.”