The waters of Clark County 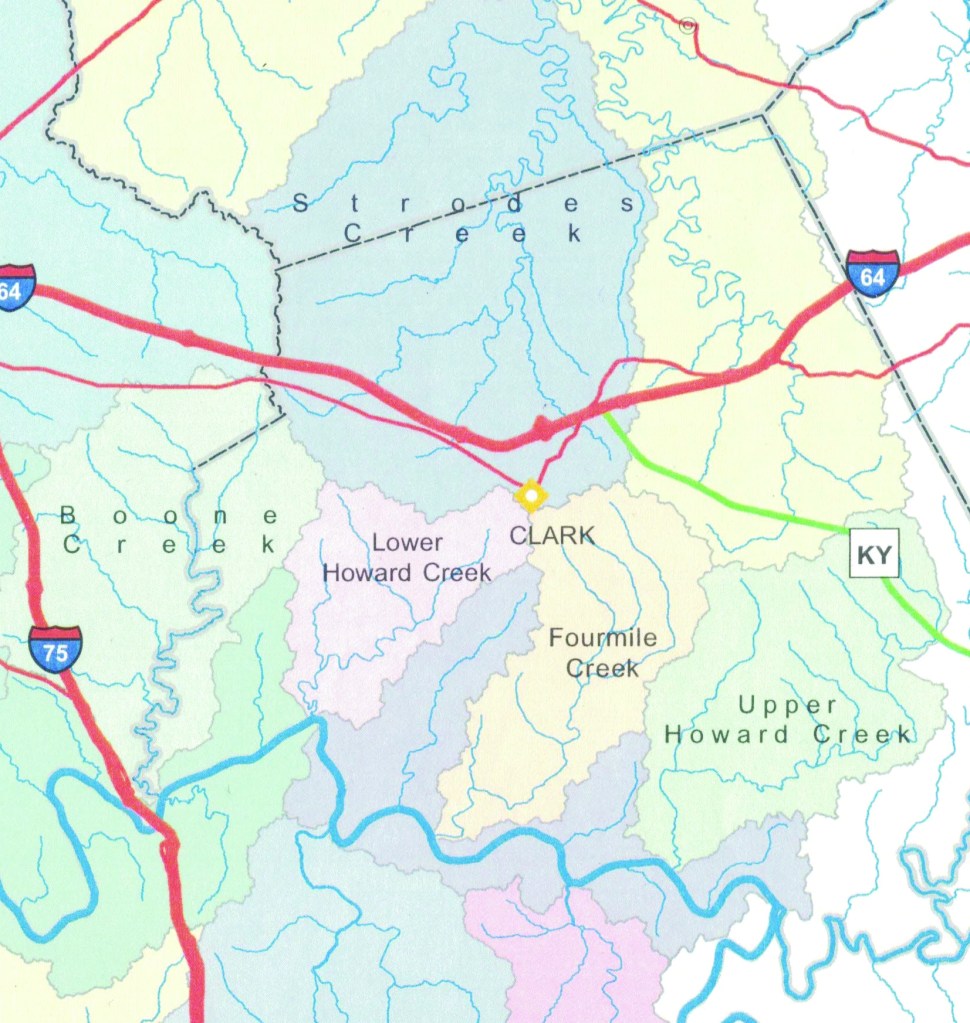 WHERE IN THE WORLD?

The subject of this article came from a reader who asked, “Where do our creek names come from?” An excellent question, and one I have thought about for a long time. One surprise for me is that fact that in almost all cases the names we use today were assigned well before Clark County was formed in 1792.

Most of the streams were named by those seeking land in pioneer Kentucky; the specific locations of their claims were usually identified by watercourses, many of which took the name of early settlers.

Our largest stream is the Kentucky River, which was first called Cuttawa or Cuttaway River by Dr. Thomas Walker (1749) and Christopher Gist (1751).  By the time of Lewis Evans’ 1755 map it had devolved to “Kentucke River.”  Many versions of the origin and meaning of “Kentucky” have been advanced; none are widely accepted today.

We will address the tributaries of Kentucky River, beginning with Boone Creek at our Fayette County border and traveling 20 miles upstream to the county line at Red River.

Boone Creek took its name from Daniel Boone, who in 1779 located his station near present-day Athens on one of its branches. The name goes back at least to 1775, when John Floyd performed a military survey for James Hickman on “Boons Creek.”

Jouett Creek has been spelled many different ways, including “Jewett’s,” “Dewitt’s” and “Duard’s.” This confusing state of affairs was not helped by a local history article that stated the name came from “Henry Deuet, a Frenchman who was a large land owner in what was then Fayette and Bourbon counties.”  Henry Deuet cannot be found. Matthew Jouett came out to Boonesborough in 1775, made an improvement on said creek, then went back to Virginia and died during the Revolutionary War.  His brother John later came out and pressed his claim for the tract, which was denied.  He spent 37 years in court in a futile attempt to gain title.

Bush Hollow Branch is small tributary of Jouett, where Ambrose Bush Jr. settled after he acquired a tract of land from John Holder in 1799.

Lower Howard’s Creek takes its name from John Howard, a Virginian who staked his claim by “building a Cabbin & making other improvements” on the stream in 1775.  John Holder purchased Howard’s claim and went on to establish a station, ferry, boatyard, inspection warehouse, tavern and gristmill, laying the groundwork for what became one of Kentucky’s first industrial areas.

Howard entered a second claim at the mouth Upper Howard’s Creek, 14 miles upstream.  He became a wealthy planter of Fayette County and is buried in a graveyard on what is today Gainesway Farm.

Twomile Creek and Fourmile Creek were supposedly the distances from Fort Boonesborough to the mouth each stream. Twomile, however, is 3.4 miles by river and 1.6 miles as the crow flies from Boonesborough.  Fourmile is similarly off, 5.6 miles and 2.6 miles, respectively.

I’ve been told more than once that the stream flowing beside Muddy Creek Road is, in fact, Muddy Creek. Not so  It’s Fourmile Creek. At Hunt the road continues south to the old ferry landing on Kentucky River.  Jackson Ferry crossed the river there to the mouth of Muddy Creek, which lies in Madison County.

Tributaries of Fourmile include Harris Branch, where Thomas Harris settled after coming here with the Baptist colony that peopled the Bush Settlement, and Stoner Branch, where Daniel Boone’s friend Michael Stoner lived.

Upper Howard’s Creek (see above) has a small tributary, Cotton Creek, where William and John Cotton settled in the 1790s.

Two other small streams flow into the Kentucky before Red River:  Bull Run, which may have been named for a buffalo trace in the area, and Dumford Hollow Branch, where the Solomon Dumford family lived.

Red River may have been named by Daniel Boone during one of his first explorations of Kentucky.  It was well known to early explorers and surveyors and is mentioned three times in John Filson’s Discovery, Settlement and Present State of Kentucky (1784).  “Red” could refer to the frequent red banks that result from exposed iron deposits, first noted by Christopher Gist during his 1751 exploration.

Red River has two tributaries mentioned by Boone in his court depositions:  Log Lick Creek took its name from a buffalo lick where the Beazley brothers, William and Major, felled trees in 1775.  Lulbegrud Creek came from the giants’ capital in Gulliver’s Travels:  Lorbrulgrud.  Boone described how he named the creek while reading the book aloud as his company camped there in 1770.

There are two other named tributaries of Lulbegrud. Old Field Branch takes its name from Indian Old Fields through which it flows.  Combs Branch, at the northern end of Indian Old Fields, may be attributed to a member of the Combs family.  Brothers Benjamin and Cuthbert marked off their claims here in 1775.  The “Clark County Chronicles,” written in the 1920s, state that Combs Branch at one time “was large enough to afford a grist mill on is banks, near Kiddville.  It may be remarked just here that practically all the streams of this section were more than double their present size a hundred and thirty years ago, before the country was denuded of its forests.”