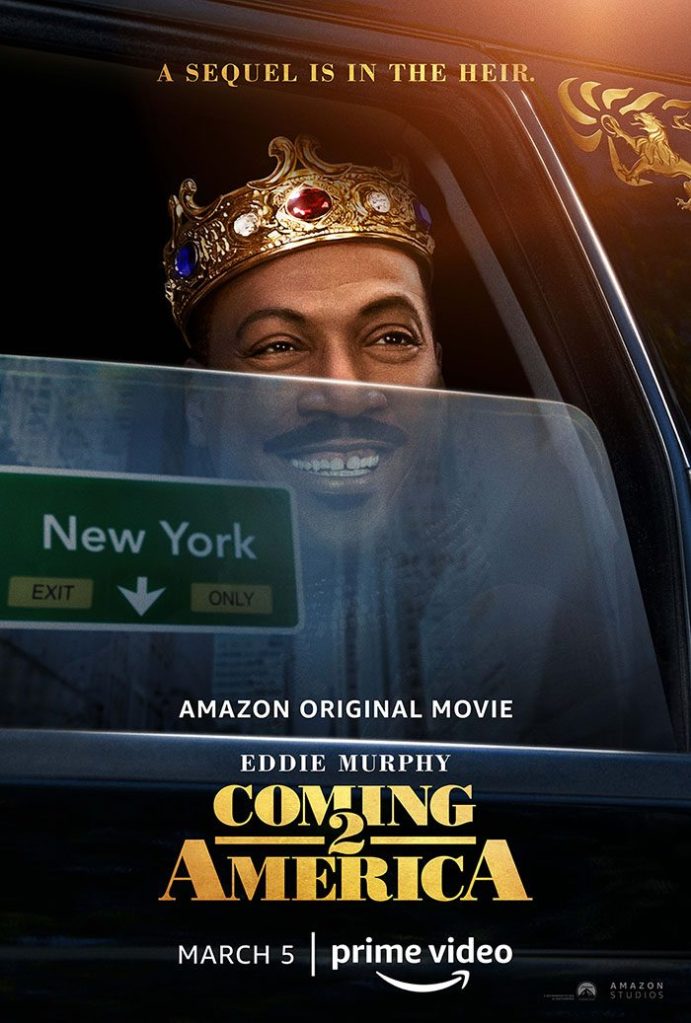 Greetings, my fellow cinephile kings and queens of Winchester!

The most important things in life are family, honor and love. The more you sharpen these swords, the more you will be armored to stand your ground at any obstacle which approaches your drawbridge.

Life is full of unexpected twists and at times is a comedy of errors. When life gives you grapes, make royal grape juice and that’s what our characters do in today’s film, “Coming 2 America” (2021).

Akeem, now the head of his nation and family, appears to be on the road to fulfilling his birthright when his fairytale life hits a pothole when it is discovered Akeem has an illegitimate adult son back in the United States. Akeem, wanting to do the right thing and connect with his birthright, packs his bags and travels with the accompaniment of trusted confidante and best friend Semmi (Arsenio “Black Dynamite” Hall) to the mean streets of Queens, New York.

“Coming 2 America” was directed by Craig “Dolemite is My Name” Brewer with a screenplay by Kenya “Black-ish” Barris, Barry W. “The Nutty Professor” Blaustein and David “Boomerang” Sheffield based off the characters created by Murphy first seen in its comedy classic predecessor, “Coming to America” (1988).

“Coming to America” was the hilarious comedy following Prince Akeem and his loyal sidekick Semmi, from the comforts of the royal court in Zamunda to the nitty gritty neighborhoods of Queens on a quest for a wife and true love in hopes to escape the arranged marriage Akeem’s family has planned for his future.

It was such a blockbuster hit upon its release in June 1888 that it skyrocketed to No. 1 and raked in approximately $350 million off a $35 million budget. The success is definitely in part to the chemistry between Murphy and Hall, the talented makeup and multiple character roles the duo play out while being helmed by legendary director John “Trading Places.”

With any success, studios try to cash in and saw the film inspire and flounder with a failed TV pilot of the same title in 1989 to star Tommy “In Living Color” Davidson and two lukewarm remakes, India’s “My Dear Marthandan” (1990) and Hong Kong’s “The Fun, the Luck, the Tycoon” (1990).

“Coming 2 America” is sure to please most fans (see the first film if you have not) that have been waiting years to see the return of these likable characters and will be treated with this installment’s addition of Jermain “Judas and the Black Messiah” Fowler, Leslie “SNL” Jones, Tracy “30 Rock” Morgan, and the versatile Wesley “Blade” Snipes. Don’t fret nostalgia lovers, Maurice (Louie “Baskets” Anderson) and Cleo McDowell (John “Good Times” Amos) return to reprise their comedic roles as well as the menagerie of makeup laden characters Murphy and Hall bring to life once again.

Can they catch lightning in a bottle once again with the sequel and reign supreme as the #1 movie this week? That’s a noble question and time will tell if the effort is one of joke or jest.

You are the master of your domain and each day is opportunity to rule over your kingdom. You don’t need an army, wealth or land. If you have unconditional love of a supportive family and your honor is pointed true north on your moral compass, it is safe to say you are already rich beyond measure as the hero in your own fairytale. Hail to the king, or queen!

Remember to make your Soul Glo and have a film-tastic day!