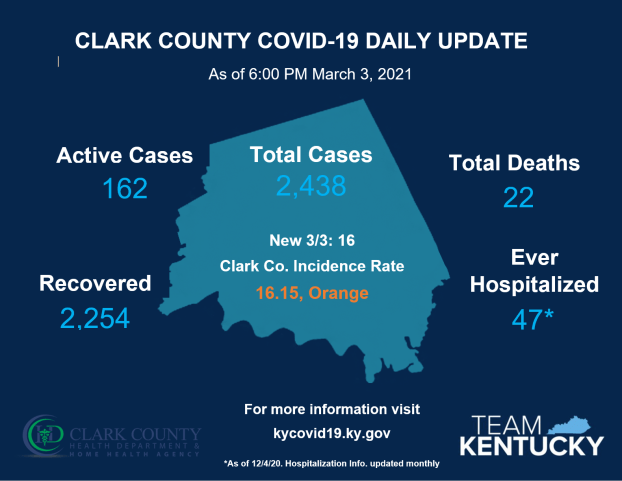 The incidence rate for COVID-19 cases in Clark County continued to decline over the past week, from 20.48 cases per 100,000 population last Wednesday, Feb. 24, to 16.15 percent this Wednesday, according to the most recent report available from the Health Department prior to this print edition issue of the Sun going to press on Thursday.

Clark County remains in the accelerated, or orange, category, which means there are 10-25 cases per 100,000. Most of Kentucky is in orange, with clusters of counties in the southeastern part of the state being notable exceptions.

The whole state has seen a steady decline in coronavirus cases for several weeks.

As of Wednesday, Clark County has had 2,438 cases, and 162 of those were active cases. Twenty-two people in the county have died of the virus, and 2,254 have recovered.

Clark County has had 50 new COVID cases since Feb. 24, including 16 new cases Wednesday.

Kentucky Gov. Andy Beshear reported 1,175 new cases Wednesday for the state and 33 new deaths from the virus. To date, there have been 4,704 COVID deaths in the state.

Beshear said in his press conference Wednesday he thinks part of the decline in cases is attributable to vaccinations.