Nailed it or failed it: Slow Cooker Thai Peanut Chicken 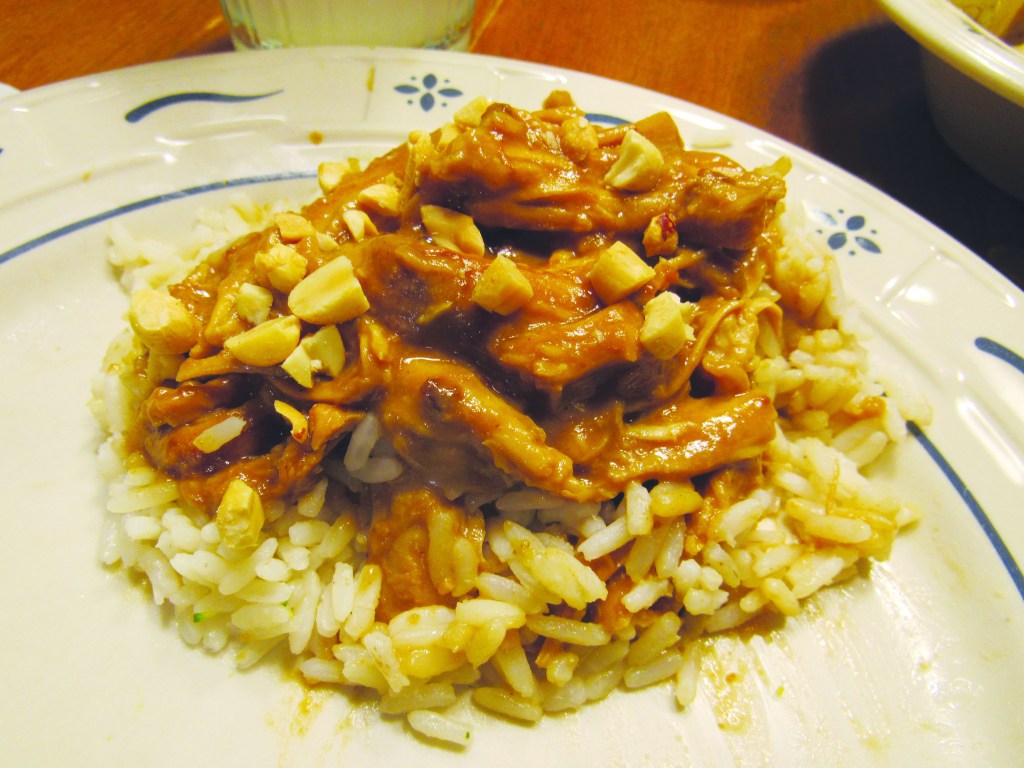 Cover and cook on low for 3 to 5 hours (or until chicken is cooked through and tender, but not overcooked, depending on the strength of your slow cooker). Reduce slow cooker temperature to warm. Remove chicken from slow cooker, cut into chunks and shred. Return shredded chicken to slow cooker to allow it to absorb sauce and heat through.

For some reason I’ve hoarded peanut butter and started looking for recipes where it is a main ingredient. I found today’s recipe for slow cooker thai peanut chicken on the internet at the fivehearthome.com. I also found a couple of other recipes that call for peanut butter that I might try in the near future.

I didn’t have coconut milk or limes so I had to wait to prepare the dish until after I’d been to the grocery.

One morning later in the week, I set the chicken out to thaw and headed to the grocery.  When I got home, I gathered all the ingredients I’d need to prepare this dish.

I have three slow cookers. One I’ve had for probably 30 years and doesn’t have a removable inside. The other two are newer with removable insides, and seem to cook hotter than my old one. I opted to use the older slow cooker for this recipe because we had plenty of time before I wanted to eat supper; and I just like it better because it cooks slower.

The chicken was thawed so I dumped it into the pot. Next, I opened the coconut milk.  Now when you open canned coconut milk, typically the solids have settled in the bottom of the can. I poured out the liquid and scooped out the solids into my bowl and used a mixer to combine both.

Once combined I added creamy peanut butter (I didn’t use natural), garlic, honey, soy sauce, fresh lime juice, rice wine vinegar and half of the red pepper flakes called for (since I don’t like spicy food).

I used the mixer again to combine everything and then poured it over the chicken. I stirred the sauce and the chicken so that each piece of chicken was coated. Then all I had to do was turn on the slow cooker to low and walked away.

After four hours, it was time to think about getting the rest of our meal together so we could eat when the chicken was done. I opted to serve the Thai chicken over rice.

Since Brad likes wild rice, I prepared some for him.  The wild rice purchases on his yearly Minnesota fishing trip takes about an hour to cook so it went onto the stove first. Once the wild rice was cooking, I started fixing some white rice for myself.

At the five hour mark, I lifted the lid off of the slow cooker and notice that around the top edge of the mixture it looked burned so I slowly and carefully scooped that out of the pot. I removed the chicken and shredded it. Back into the sauce it went to heat back up. Then we were ready to eat.

Brad opted to combine some wild and white rice then scooped the chicken on top. I scooped out white rice and topped it with the chicken and sauce. Brad had taken a few bites before I remembered to sprinkle the chopped peanuts on top. Then I asked him what he thought of this new dish.  He said he thought it was OK, and that it had too much peanut butter in it. I, on the other hand, thought it tasted really good. I was surprised that it wasn’t one bit spicy and said I probably could have used the entire amount of red pepper flakes that the recipe called for.

Brad said it’s not a dish he would ask me to fix, but he would eat it again. Since it’s just the two of us at home, we ended up with leftovers and had it again the next night.  It heated up very well and I thought it was just as good the second time around as it was the first.

Even though Brad wasn’t as fond of this recipe as I was, it is definitely a Nailed It and is headed to my self-made cook book.

I’ve still got lots of peanut butter in the cabinet and am looking forward to more recipes that include it.