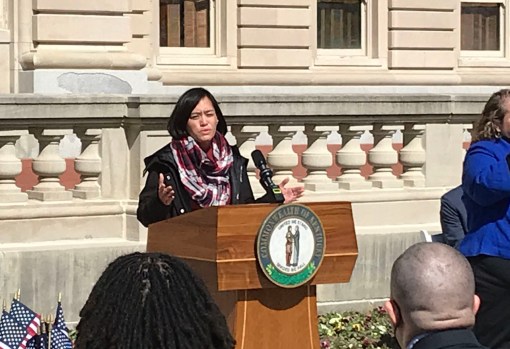 Dr. Valarie Driones-Pryor of UofL Health has worked in the COVID wing for nearly a year, In that time, she said she has worked with more than 700 patients, 50 of which ultimately died from the virus. (Photo by Fred Petke) 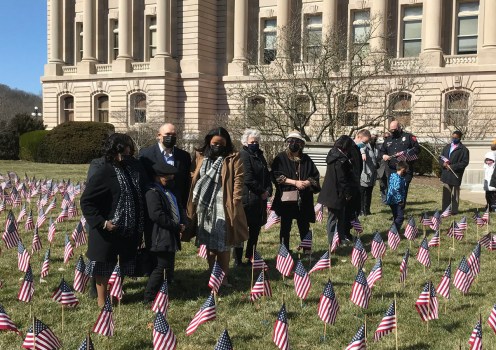 Family members, friends and co-workers of some of Kentucky's COVID-19 deaths place flags in their honor behind the Kentucky Capitol Saturday. There is one flag for each Kentucky death from the virus. (Photo by Fred Petke) 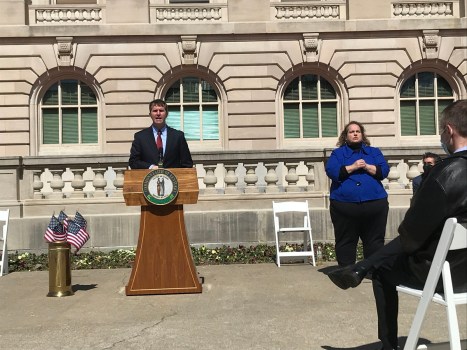 Gov. Andy Beshear, left, and interpreter Virginia Moore speak Saturday being the Capitol in an event to mark the first anniversary of Kentucky's first positive case of COVID-19. As of Saturday afternoon, 4,806 deaths in Kentucky have been attributed to the virus. (Photo by Fred Petke) 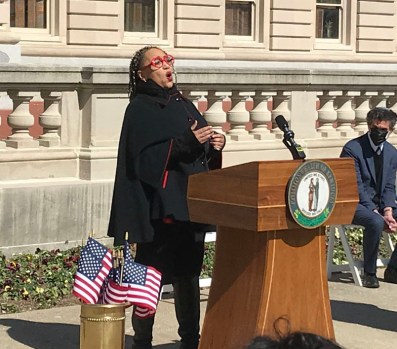 Gov. Andy Beshear admitted to leaving work a little early that day in hopes of having a little extra time with his family.

Later that afternoon, he said, he got the call of Kentucky’s first confirmed case of the coronavirus, or COVID-19.

“But that bright sunny day began a long, often dark year,” Beshear said Saturday in a ceremony to mark the first anniversary of the virus in Kentucky. “We are here to honor these thousands of Kentuckians lost to this virus.”

The grass behind the Capitol grounds is filled with small American flags, one for each Kentucky resident who died from the virus.

“As I look out at the flags planted on the Capitol grounds, I am humbled,” Lt. Gov. Jacqueline Coleman said. “Each serves as a stark reminder of what we have lost.”

“The numbers have been horrific, and they added up to this sea of flags we see here on the Capitol grounds,” she said.

As of Saturday afternoon, 4,806 deaths in Kentucky have been attributed to COVID-19.

“I hope what we do today honors those we’ve lost … and appropriately reflects the toughest year of our lives,” Beshear said. “Kentucky is a changed commonwealth, and we are a changed people.”

Beshear compared the efforts to slow the spread of the virus to a war with an invisible enemy.

“Everything is different when the war arrives on your doorstep,” he said.

Beshear announced plans for a permanent memorial on the Capitol grounds to remember those who died from the virus, but that effort would begin later, in light of the ongoing flooding across Kentucky.

“Right now, we’ve got far too many people in the West and the East that need help,” he said.

Those on the front lines are still doing the work, whether treating those with the virus or distributing the vaccine.

Dr. Valarie Briones-Pryor, a doctor at U of L Health Jewish in Louisville, said she has been working on the COVID ward for nearly a year. She said she treated more than 700 COVID patients, 50 of which ultimately died.

“I’m honored to take care of any of those patients,” she said. “I hope we’re more appreciative of everything we have.”

“Before COVID, I would say I was just the school nurse supervisor,” she said.

The emotions have run the gamut, from grief to frustration to feeling overwhelmed  and inspired, to hurting with each death from the virus. Keeping up with the ever-changing guidelines became a job in itself, she said.

“I hate this pandemic ever happened, and I hate the pain it brought to each of us,” she said.