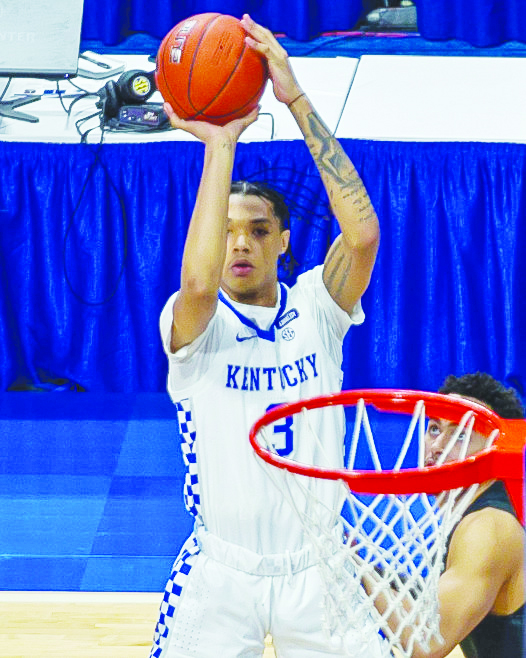 The Wildcats closed out the regular season with an impressive 92-64 rout of South Carolina Saturday at Rupp Arena. The home finale ended a roller-coaster ride that hit a straight stretch against the Gamecocks.

‘We got better and we made some shots,” Kentucky coach John Calipari said. “It’s a good sendoff for us.”

Now that the regular season is over, Kentucky (9-15, 8-9 Southeastern Conference) and South Carolina (6-14, 4-12) will compete in the league tournament that begins Wednesday at Bridgestone Arena in Nashville. The Wildcats, the No. 8 seed, will play ninth-seeded Mississippi State to open the tournament at noon Thursday. The winner plays top-seeded Alabama at noon Friday in Nashville.

In an effort to jumpstart his squad that entered the contest with a two-game losing streak, following losses to Florida and Mississippi last week, Calipari changed his starting lineup, inserting Jacob Toppin in place of guard Devin Askew.

BJ Boston set the tone by hitting back-to-back 3-pointers as Kentucky scored 12 of the first 16 points. Boston led four Wildcats in double figures with 21 points and connected on six shots from long-range.

“He’s never lost the fight,” Calipari said. “This stuff has been hard for him.”

While Boston provided an early boost, it was  Mintz who provided the proverbial knockout punch with five 3-pointers in the first five minutes of the second half. Mintz made three straight treys to give the Wildcats a 55-36 advantage with 15 minutes remaining. Like Boston, Mintz made six 3-pointers and finished with 20 points.

“That was big for me because I didn’t practice all week because of a bum ankle,” said Mintz, who added five rebounds and dished out seven assists. “To get that feeling and going crazy like that, that was huge for me.”

Mintz  said he also felt at ease as the team’s point guard and was happy to give the Wildcats more support as the leader in the backcourt.

“I’m a natural there (at the point),” he said. “It’s a different feel and it’s been a while since I’ve played (the point). When the ball is in my hands and I get a few possessions, I just snap right back. I’m comfortable at either spot I play at.”

Overall, Kentucky made 13 shots from long range with eight of those coming in the second half. The Wildcats complemented the outside shooting with a solid presence in the post. Olivier Sarr added 15 points, followed by Isaiah Jackson with 13 points and 10 rebounds.

Calipari cleared the bench in the final five minutes as Cam’Ron Fletcher and Zan Payne scored two points apiece. It was Fletcher’s first appearance since a loss to North Carolina on Dec. 19.

“It was a lot of fun,” Jackson said. “We needed a big (break). It felt really good to just sit back and enjoy the game.”

BY JOHN PAUL MARTIN Sun Correspondent Anyone who loves sports remembers the first time they walked into a professional stadium.... read more